Tripura reduced Goa to 113/3 after enforcing the follow-on on Day 3 of their Ranji Trophy 2018-19, Elite C, round 6 tie at the Police Training Academy Ground in Agartala.

At stumps, the visitors were still trailing the hosts by 53 runs.

Goa were 110/4 when the day’s play began but kept losing wickets at regular intervals despite handy partnerships. Overnight batsman Suyash Prabhudessai was the first wicket to fall on Sunday when he holed out on 34. A brief association of 20 runs between Mohammad Asaduddin and a well-set Snehal Kauthankar followed which broke when the former was out caught behind for 15.

Darshan Mittal lasted 42 deliveries to add 14 runs to the Goa total before Abhijit Sarkar’s (4/29) removed their last four batsman his successive overs. Kauthankar, innings top-scorer, was the ninth wicket to fall after having made 79 off 209 with 12 fours.

Goa were bowled out for 192 and failed thus failed to avoid the follow-on.

They lost their top-three batsmen quickly in the second dig apart from Rajashekhar Harikant being retired hurt on 1. At the close of play, Suyash Prabhudessai (39*) and Snehal Kauthankar (23*) had built an unbroken partnership worth 55 runs for the fifth wicket. 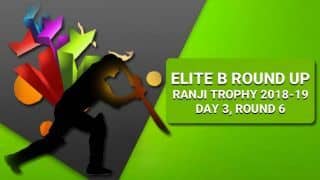