An unbeaten half-century from Abhimanyu Easwaran formed the backbone of Bengal’s total of 99 for 2 against Hyderabad on a rain-marred day.

An unbeaten half-century from Abhimanyu Easwaran formed the backbone of Bengal’s total of 99 for 2 against Hyderabad on a rain-marred day at the Rajiv Gandhi International Stadium on Friday. After the first session was washed out due to a wet outfield, only 38 overs of play was possible in which Bengal lost opener Abhishek Raman cheaply and Sudip Chatterjee LBW to Chama Milind for 32.

Hyderabad won the toss and opted to field in their Round 6 Group B fixture of the 2018-19 Ranji Trophy. It took them under five overs to get their first breakthrough when Raman was removed by Ravi Kiran for 3. Easwaran and Chatterjee then combined to score 78 runs for the second wicket before a lapse in concentration resulted in Chatterjee losing his wicket for 32.

Skipper Manoj Tiwary and Easwaran then took the total within striking distance of 100, Easwaran remained unbeaten on 57 with six boundaries and a six. 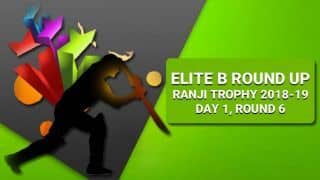 Ranji Trophy 2018-19, Elite Group B: Himachal one down after Pankaj Jaiswal takes five against Andhra