Roundup of all the action from Round 1 from the Elite Group C of the Ranji Trophy 2018-19 season.

Uttar Pradesh cruised to a thumping innings and 247-run win over Goa in their first Elite Group C match on the last day at the Green Park Stadium in Kanpur on Sunday. Uttar Pradesh needed just a little over than an hour on Sunday to wrap up Goa innings that resumed at 123/8 on the last day. After bowling out Goa for 152, Uttar Pradesh had declared their first innings at a massive 564/4 with Akshdeep Nath missing out on his double-century by six runs as Goa were set a target of 412. However, on Sunday, Ankit Rajpoot snapped the remaining two wickets of Felix Alemao (1) and Krishna Das (1) as Goa were bowled out for 165. Darshan Misal was stranded on 51 as Uttar Pradesh walked away with important seven points.

At the Sawai Mansingh Stadium in Jaipur, Rajasthan bagged their first six points after a 75-run win over Jammu and Kashmir on Sunday. Set a 395-run target, Jammu and Kashmir, resuming at their overnight score of 34/0, looked confident to chase down the target with captain Parvez Rasool leading the charge with an unbeaten 110. However, Rasool s eighth first-class century went in vain, with support at the other end. Veteran India allrounder Irfan Pathan too failed to contribute and departed for just 35. Pacer Nathu Singh (4/83) and legspinner Rahul Chahar (4/89) inflicted the most damage on the J&K batting line-up.

At Ranchi, the Jharkhand versus Assam match ended in a draw, but it was the homeside that pocketed three points after taking the first innings lead. Resuming their second innings score at 44/1, after conceding a first-innings lead of 46 runs, Jharkhand added another 186 runs to declare their second dig at 230. Skipper Ishan Kishan scored 120 of those runs and brought up his fifth first-class century in 34 matches. In reply, Assam ended the last day at 140/2 with Sibsankar Roy (52*) and Gokul Sharma (48*) at the crease. For Jharkhand, Anukul Roy claimed both the wickets as the match ended in a draw.

At Bhubaneshwar, skipper Biplab Samantray notched his sixth first-class century for Odisha as they ended their last day at 267/7 against Haryana s 442. Resuming at 50 for 1 after scoring 324 in their first dig, Odisha lost Govinda Poddar early in the day to Tinu Kundu, who snapped two wickets. Anurag Sarangi, the first innings centurion, could add just 29 after he was caught by Navdeep Saini off Haryana skipper Mohit Sharma. With wickets falling at the other end, Samantray took on the onus of run scoring and batted 210 deliveries for his 110* in which he smashed 14 boundaries and two sixes. Haryana thus won three points for the draw after gaining a vital first-innings lead. For Haryana, Jayant Yadav was the most economical bowler with 2/45 in his 28 overs.

At the MBB Stadium in Agartala, Tripura pocketed three points after gaining a vital first-innings lead against Haryana on Sunday. Resuming their second innings at 110/0, Bishal Ghosh, who notched a scintillating 201 in the first innings, his highest first-class score, carried on the momentum with a well-crafted half century off 129 balls. However, he departed soon after reaching his fifty to Diwesh Gurdev Pathania.

Ghosh s opening partner Udiyan Bose, meanwhile, reached his third first-class century, but was cleaned up by Vikas Yadav for 109. Tripura declared their second innings at 232/2. In reply, Services had a disastrous start, with fast bowler Manisankar Murasingh, who produced career best figures of 7 for 53 in the first dig, took a wicket in the first delivery of the second innings as Nakul Verma walked back for a duck. Murasingh claimed the wicket of the other opener, NK Singh for another duck as Services were two down in the third over. Ravi Chauhan top scored with 47 as Services ended the day at 164/6. 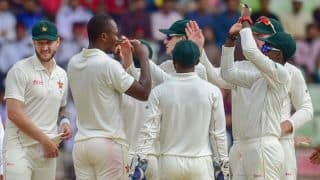 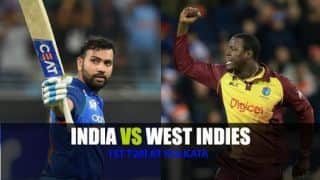