Maharashtra took three points on the basis of their first innings lead as their Elite Group A Ranji Trophy game against Mumbai ended in draw.

Maharashtra took three points on the basis of their first innings lead after their Elite Group A Ranji Trophy game against Mumbai ended in a draw on Sunday.

Maharashtra, who had taken a first innings lead of 79, were bundled out for 254 in their second essay with skipper Rahul Tripathi top scoring with 76 at the MCA International Stadium at Gahunje on the outskirts of the city.

For Mumbai , Shivam Dubey (3-25) and Shivam Malhotra (3-41) took three wickets each. Mumbai, who are yet to register a single win, were set an improbable 334-run target and ended up at 135 for 5 when the match was declared drawn.

Experienced Aditya Tare remained unbeaten on 52 in company of Shivam Dubey (8 not out). Maharashtra opener Swapnil Gugale, who had hit a century in the first innings, was adjourned as the Man of the Match. 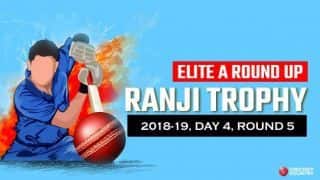