Himachal Pradesh cruised to their first win of the season after they bowled out Punjab for 199 on the fourth and final morning of their Ranji Trophy 2018-19, Group B, Round 5 match in Mohali. After being skittled for 84 in their first innings, the hosts fared a tad better in their second essay but couldn’t avoid the innings defeat after the visitors enforced the follow-on.

Himachal ended the third day needing just two more wickets for their first win of the season. Shubek Gill and Sandeep Sharma though put up a brave fight, frustrating their opponents with a 41-run stand for the ninth wicket.

Resuming on 195/8, the pair added four more to the total before Sandeep was run out by Pankaj Jaiswal on 12. Arpit Guleria then cleaned up Shubek off the very next delivery after Sandeep’s departure to seal the deal in 81.5 overs. Shubek scored 41 off 83 with the help of six fours.

Gurvinder Singh finished with figures of 4/44 while Guleria and Mayank Dagar chipped in with a couple of wickets each. 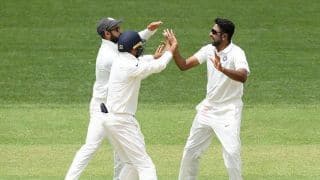