Debutant offspinner Shivank Vashisht picked up a five-wicket haul as Delhi ended with three points after a draw with Andhra.

Debutant offspinner Shivank Vashisht picked up a five-wicket haul as Delhi ended with three points after a draw with Andhra in the Ranji Trophy here Sunday, a game that marked the end of Gautam Gambhir’s illustrious career.

Delhi, resuming the day at 409 for seven, went on to score 433 in response to Andhra’s 390 all out for the all-important first innings lead. Gambhir made a mark in his farewell game with a solid 112. However, he did not come out to bat on the final day after Delhi dismissed Andhra for 130 all out in 59 overs.

Set an 88-run target, Delhi managed 41 for two in five overs with Anuj Rawat dismissed on what turned out to be the final ball of the day. Vashisht did the maximum damage for Delhi and ended with figures of 5 for 49 in 20 overs. Left-arm spinner Vikash Mishra took three wickets to take his match tally to five.

With a third draw in four matches, Delhi are yet to taste victory this season and face a huge task of making the knock-outs. They are placed second last in Group B, only ahead of Andhra.

Delhi have been below-par but they have also been hit by the absence of lead pacer Navdeep Saini, who is in New Zealand with the India A squad. 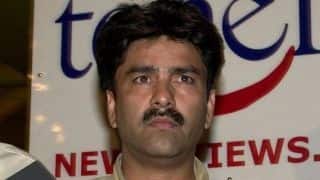