Services finished the third day of their Ranji Trophy 2018-19, Group C, Round 5 match against Goa at 277/5, having taken their second innings lead to 202 runs.

Services finished the third day of their Ranji Trophy 2018-19, Group C, Round 5 match against Goa at 277/5, having taken their second innings lead to 202 runs.

After losing two wickets early in their second innings, Services recovered through century-stand between captain Rajat Paliwal and opener Navneet Singh for the third wicket. Lakshay Garg trapped Anshul Gupta for an eight-ball duck (0) while Ravi Chauhan hit a boundary before being removed by Vijesh Prabhudessai to depart for a run-a-ball five.

At 7/2, Services were jolted early. Paliwal and Navneet repaired the damage, adding 123 runs between them. Navneet hit six fours to score 67 off 130 and became Vijesh’s second victim.

Paliwal was then joined by Gahlaut Singh and they steered the innings forward, taking it to 230 before being separated. Paliwal fell six runs short of a deserved century when he was caught by Amogh Desai off Amit Verma. He struck 11 fours while consuming 185 deliveries.

Amit struck again in quick time when he trapped Devendra Lohchab for a duck. Gahlaut remained unbeaten on 81 and together with Nitin Tanwar (15*) saw through the day without further damage.

Earlier, Goa lost their last wicket without adding a run to their overnight total of 259 to secure a 75-run lead. 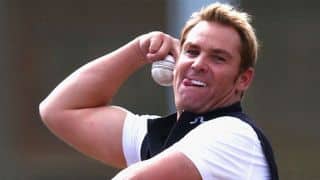