Railways had their noses ahead with a 130-run lead in their second dig.

Railways had their noses ahead with a 130-run lead in their second dig at the end of day three in an Elite Group A Round 2 match of the Ranji Trophy 2018-19 season with hopes pinned on Harsh Tyagi, who was unbeaten on 73, against Saurashtra on Wednesday.

Saurashtra added just four to their overnight score of 344 and folder inside three overs with Tyagi s left-arm spin claiming the remaining two wickets of Jaydev Unadkat (0) and Dharmendrasinh Jadeja (4). India allrounder Ravindra Jadeja was stranded at the other end after a brilliant 178 as Saurashtra ended their first innings at 348 in reply to Railways 200.

In the second innings, Saurashtra s Jadejas Ravindra and Dharmendrasinh shared seven wickets among them to reduced Railways to 278/8 at stumps on day three. Opener Saurabh Wakaskar was the first to depart after he was trapped lbw off Dharmendrasinh for 30. The India star then claimed the wicket of the other opener Nitin Bhille (20) as Railways found themselves two down with 59 on the board.

PS Singh and Arindam Ghosh steadied the innings with a 52-run partnership for the third wicket, before Ravindra had Ghosh caught by Sheldon Jackson for 21. Railways then lost two wickets and slipped to 158/5. Faiz Ahmed added 26 before Dharmendrasinh trapped him lbw.

Tyagi stood firm and batted with the lower middle-order to notch 73 off 182, an innings that was laced with three boundaries and two sixes. At stumps, Tyagi had Anureet Singh (12) for company and the duo will want to swell the lead to a competitive target on the final day. 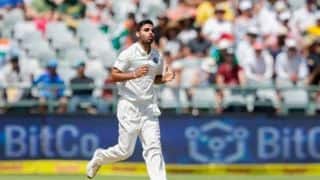