For Saurashtra, Jadeja returned with impressive figures of four for 53 in his 19 overs, while Sakariya went for 29 runs in his 15 overs.

Uttar Pradesh consolidated their position in their Ranji Trophy 2018-19 quarter-final against Saurashtra extending their lead to 349 on the third day at the Ekana Cricket Stadium in Lucknow. At stumps, UP were 172/8.

Earlier in the day, Saurashtra, resuming their first innings at 170/7, were wrapped up for 208. Prerak Mankad, overnight on 42, went on to score 67 before he was dismissed by Yash Dayal, who added two wickets to his tally to emerge as the pick of the UP bowlers with four for 55 in his 17.4 overs.

Shivam Mavi, who picked up three wickets on day two, went wicketless, while Ankit Rajpoot added a wicket to finish the innings with three for 71 in his 24 overs. (ALSO READ: Wasim Jaffer s double century pushes Vidarbha s lead to 204 against Uttarakhand)

In reply, Uttar Pradesh stuttered in the batting department. They lost opener Madhav Kaushik for 19 after he was trapped lbw by Dharmendrasinh Jadeja in the 17th over.

Rahul Rawat and Mohammad Saif steadied the innings with a 73-run partnership for the second wicket, but after the stand was broken, the home side kept losing wickets at regular intervals.

Jadeja returned in the 39th over to see the back of Rawat, who added 37, while Saif fell two runs short of his half century to hand left-arm spinner Jadeja his third wicket.

First innings centurion Rinku Singh departed for a duck to Jadeja in the 43rd over.

Left-arm pacer Chetan Sakariya then accounted for the next three wickets. He had Priyam Garg (25), Akshdeep Nath (1) and Saurabh Kumar (0) in a span of three overs. (ALSO READ: Kerala crush Gujarat by 113 runs to enter semis for first time ever)

Mavi (1) was the last wicket to fall on the day after he edged it behind to Snell Patel off Kamlesh Makwana.

For Saurashtra, Jadeja returned with impressive figures of four for 53 in his 19 overs, while Sakariya went for 29 runs in his 15 overs. 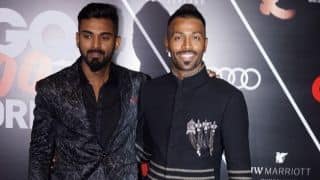 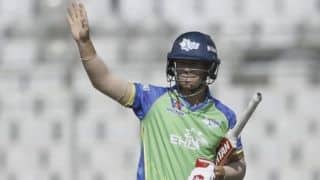