Rinku, who has been in supreme form this season with 803 runs, entered when the home side were at a precarious 54/4 in the 19th over.

Rinku Singh notched his fifth first-class century to power Uttar Pradesh to a massive 340/7 on the opening day of the Ranji Trophy 2018-19 Quarter-final 2 against Saurashtra at the Bharat Ratna Shri Atal Bihari Vajpayee Ekana Cricket Stadium in Lucknow on Tuesday.

Rinku, who has been in supreme form this season with 803 runs, entered when the home side were at a precarious 54/4 in the 19th over. Dharmendrasinh Jadeja and Jaydev Unadkat were responsible for running through the UP top order.

Opener Rahul Rawat fell for nought to the left-arm pacer in the third over. Unadkat returned two overs later to send No. 3 batsman Mohammad Saif for a duck after he was caught by Harvik Desai.

Dharmendrasinh the left-arm spinner then got into action to claim his first wicket in the quarter-final after Madhav Kaushik was caught by Arpit Vasavada to depart for 37. Two deliveries later, he cleaned up Akshdeep Nath for 17.

However, UP s most reliable batsmen Priyam Garg and Rinku then conjured 145 runs for the fifth wicket to arrest the flow of wickets.

The partnership was broken after Garg fell one run short of his fifty. He was dismissed by Chetan Sakariya after edging one behind to wicketkeeper Snell Patel.

Rinku then found able support from Upendra Yadav as the duo added 83 runs. Rinku, who scored 149 in the previous match against Assam, carted 19 boundaries in his 181-ball stay at the crease before he was dismissed by Kamlesh Makwana.

Upendra was the last wicket to fall to Jadeja. He walked back after scoring 26 off 68 deliveries.

For Saurashtra, who received a major boost by the inclusion of Test veteran Cheteshwar Pujara, Dharmendrasinh was the pick of the bowlers with three for 111 in his 28 overs. Unadkar ended the day with figures of two for 65 in 17 overs. 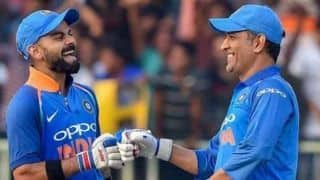