Gujarat stopped Kerala for a low 185/9 but were left struggling by the close of play on Day 1 of their Ranji Trophy 2018-19 quarterfinal clash in Waynad on Tuesday.

Gujarat stopped Kerala for a low 185/9 but were left struggling by the close of play on Day 1 of their Ranji Trophy 2018-19 quarterfinal clash in Waynad on Tuesday. (ALSO READ: Rinku Singh s 150 pushes Uttar Pradesh to 340/7)

After opting to field, Chintan Gaja (4/57) and Arzan Nagwaswalla (3/50) ran through the Kerala lineup to have them bowled out inside 40 overs.

The opening pair was positive with Ponnam Rahul (26) and Mohammed Azharuddeen (17) adding 29 runs. Roosh Kalaria landed the first blow when he bowled Azharuddeen in the seventh over.

Gaja then took care of Rahul which led to period when Kerala lost three wickets with the scorecard static at 52. From 52/1, they found themselves in deep trouble at 52/4.

Their problems were compounded when Sanju Samson copped a nasty blow on his finger and was taken to the hospital that revealed a fracture. He didn’t return to bat again. The lower order, led by Basil Thampi (31), put up some fight but Gaja mopped up the tail in his successive overs.

Gujarat lost their openers cheaply inside seven overs to Sandeep Warrier. Priyank Panchal struck two fours before being bowled in the fifth over while his opening partner Kathan Patel managed 1 before becoming Warrier’s second victim.

Captain Parthiv Patel and Rahul Shah led a brief recovery adding 42 runs for the third wicket. Thampi got rid of the pair by first cleaning up Parthiv on 43 and then pinning Shah on 15.

Dhruv Raval (12*) and Rujul Bhatt (10*) saw through the rest of the day, preventing further damage with Gujarat trailing by 88 runs. 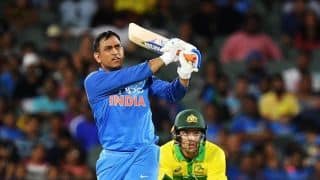