Left-arm spinner Ashutosh Aman claimed his seventh first class five-wicket haul in just sixth match to lead Bihar to a resounding 273-run win over Nagaland in on day four of Round 7 of Ranji Trophy 2018-19 season at the Moin-ul-Haq Stadium, Patna on Tuesday.

Aman, who had claimed 7/47 in Nagaland s first innings, grabbed 5/49 in the second. Aman now has an astonishing 51 wickets from six games and is the leading wicket-taker in the season so far.

Bihar claimed their fourth win to climb to the second in the points table in Plate. Bihar overturned a first-innings deficit of 59 runs. Starting the day at 112/7 in chase of 446 runs to win, Nagaland put up a brief resistance with skipper Rongsen Jonathan, overnight on 57, scoring 100 off 113 balls. He got support from Inkato Zhimomi (18 off 48) and Rachit Bhatia (17 off 51).

Aman who had on day three picked three wickets, added two more on day four while pacer Vivek Kumar, who had grabbed four wickets on day three, picked one to finish with 5/65.

Bihar were bowled out for 150 in the first innings with Nagaland s Bhatia taking 6/44. In reply Nagaland managed to put 209 on board despite Aman s 7/47, riding on skipper Jonathan s 53. However, Bihar turned things around scoring 505/8 declared in the the second innings, setting Nagaland a stiff target of 446 runs.

Opener Mangal Mehrour scored 177 while MD Rahmatullah added 107. Vivek and Aman then reduced Nagaland to 22/5 before Jonathan out in a rearguard effort to take the game to the final day. 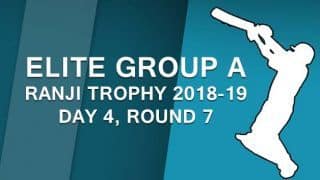 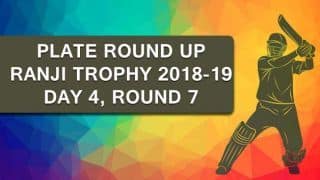 Ranji Trophy 2018-19, Round 7, Day 4, Plate: Uttarakhand-Puducherry take one point each in abandoned match