Rawat, who brought up his first century this season, smashed 14 boundaries in his 149-ball 102.

Table-toppers Uttarakhand were helped to 377 courtesy Saurabh Rawat s fine 102 on the opening day of their Ranji Trophy 2018-19 Round 9 Plate match against Mizoram on Monday. At stumps, Mizoram were 8/0, behind by 369 runs.

Put into bat, Uttarakhand s inform openers Karanveer Kaushal (6) and Vineet Saxena (35) were back in the hut in the first 15 overs. However, a 144-run partnership for the fourth wicket between captain Rajat Bhatia and Rawat, steadied the innings.

The partnership was brought to an end after Bhatia, who scored a run-a-ball 84, departed after he was trapped leg-before to Andrew Vanlalhruaia. Rawat, who brought up his first century this season, was dismissed by G Lalbiakvela in the 70th over after smashing 14 boundaries in his 149-ball 102.

Malolan Rangarajan kept the scoreboard ticking to add 58 off 76, his innings studded with five boundaries and one six before he was trapped lbw to Akhil Rajput. 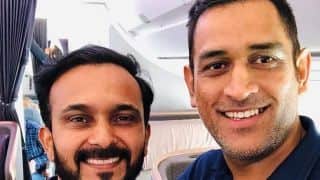