Unadkat and Jadeja took three wickets each to peg the home side back after Saurashtra made just nine runs from their overnight score of 236/7.

Saurashtra conceded a first-innings lead but bounced back to restrict Karnataka to 237/8 in the second dig, ahead by 276 runs, on day three of the Ranji Trophy 2018-19 semi-final at the M Chinnaswamy Stadium in Bengaluru on Saturday. (ALSO READ: Fiery Umesh leads Vidarbha to second straight Ranji Trophy final)

Left-arm pacer Jaydev Unadkat and spinner Dharmendrasinh Jadeja took three wickets each to peg the home side back after Saurashtra made just nine runs from their overnight score of 236/7 in their first innings.

With his three wickets, Unadkat became only the second bowler from Saurashtra to reach 200 wickets in his 59th match. His team-mate Kamlesh Makwana has 226 wickets.

With a 39-run lead, Karnataka were off to a poor start in their second essay. They lost their top three wickets for 52 runs inside the first 15 overs. Opener Ravikumar Samarth was the first to go after he was cleaned up by Unadkat in the third over for just 5. Krishnamurthy Siddharth was trapped lbw by Prerak Mankad and departed for 8.

Mankad returned six overs later to see the back of the experienced Karun Nair who was out leg before for a paltry 15.

Captain Manish Pandey tried to stem the flow of wickets, but his resistance ended in the 25th over when he was dismissed by Jadeja for 26 off 40. In-form batsman Mayank Agarwal missed out on his half-century by four runs after he was castled by Jadeja, who pocketed his second wicket. (ALSO READ: Ronit More 5/54 keeps Saurashtra in check)

With wickets falling at the other end, the Karnataka innings was held firmly by Shreyas Gopal, who was unbeaten at 61 off 134 deliveries at stumps. Vinay Kumar added just 12 before he was castled by Unadkat. Krishnappa Gowtham was the last wicket to fall after he was dismissed by Jadeja for 11.

Abhimanyu Mithun and Gopal then constructed a partnership as the duo forged 61 runs for the still unconquered ninth wicket when stumps were drawn.

Saurashtra will to wrap up the Karnataka innings on the penultimate day and limit the lead to as much as possible.

Meanwhile, Unadkat returned with exceptional figures of 3/35 in his 15 overs going at a stingy economy rate of 2.33, while Jadeja went for 77 in his 27 overs, equally miserly at 2.85.

Earlier, Ronit More, who had picked a five-wicket haul on Friday, added one more to his tally, while Mithun added two as Karnataka bagged a vital first-innings lead. More picked 6/60 in his 18 overs, while Mithun registered figures of 3/46 in his 19 overs. 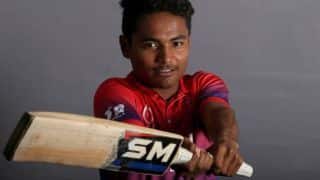 It's good that lot of guys are competing for one allrounder's slot: Kedar Jadhav