The results meant Delhi were knocked out of quarter-finals race.

Karnataka and Bengal have made it to the quarter-finals of the ongoing Ranji Trophy 2019-20 after registering contrasting victories on Friday.

Karnataka beat Baroda by eight wickets chasing 149 in Bengaluru. Baroda were skittled for 85 in their first innings but displayed a vastly improved show with the bat in their second dig to be 296 all-out.

Karnataka were handed an early jolt in the sixth over with opener Devdutt Padikkal being caught for 6. However, that turned out to be a blip with captain Karun Nair hitting an unbeaten 71 to secure their last-16 berth. With that win, Karnataka are second in Elite Group A and B table with 31 points from eight matches.

On the other hand, Bengal came back strongly to bowl out Punjab for 141, defending a low 189 to jump to the top of the Elite Group A and B points table. Resuming on their overnight total of 199/9, Bengal added three more before losing their 10th and final wicket.

Chasing 190, Punjab lost half their side by 17th over with just 37 the scoreboard. Ramandeep Singh repaired the damage alongside Anmol Malhotra as the duo added 63 runs for the sixth wicket. However, Shahbaz Ahmed (4/44) broke them apart following which Punjab didn’t recover.

Ramandeep remained unbeaten on 69, cutting a sorry figure at one end watching wickets tumble at the other with Punjab bowled out in 47.3 overs.

The results meant Delhi were knocked out of quarter-finals. At the Arun Jaitely Stadium, Delhi enforced a follow-on after bowling out Rajasthan for 299 in their first innings after posting 623. 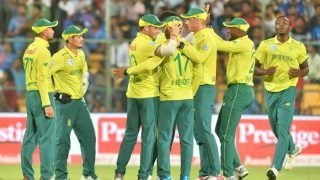