The Day 1 of the ongoing Ranji Trophy 2016-17 was splayed across the country on Sunday, while it was also the first match day following demonestation.

The Day 1 of the ongoing Ranji Trophy 2016-17 was splayed across the country on Sunday, while it was also the first match day following Indian Prime Miniter Narendra Modi‘s decision to scrub the bank notes of Rs. 500 and Rs. 1000 currency. The banks remained open even on Sunday past the sunset, with people waiting in long queues outside the bank to exchange their existing currencies. The decision has also taken a toll on the Ranji players, as they have to stick on to their remaining notes for their daily allowances, only if their respective associations have arranged enough notes for them. LIVE Cricket Score Ranji Trophy 2016-17, Day 2, Round 6

Even if we order, we need change for Rs 500 or Rs 1,000. Somehow we are managing it. Few players have gone out and paid by cards. But it s tough to go out each day just to pick up food. We really don t have change as the daily allowance we get is Rs 1,000. Last night I requested my manager and he arranged for the change. But we can t just keep asking our manager to do that every day, Goa coach Prakash Mayekar said, reports Indian Express.

We had been carrying our allowance for the first four matches. Now it s gone. The problem is that even the CAB is complaining about not having enough currency notes to accommodate our request, which is understandable. So we will have to try and arrange for something, Vidarbha team manager Kishore Wakode said.

We have told them that we will settle the bills later and say if some of them are keen on ordering from outside they can go ahead. We will reimburse that amount later into their accounts. We don t want our players to go stand in queues to exchange notes. Some of them are very well-known and it could cause a security hassle, said MCA joint secretary Unmesh Khanvilkar.

The TNCA has made sure that the full-meal buffet is on the house as far as we are concerned. We still aren t sure if it ll be directly debited to the account, Tamil Nadu skipper Abhinav Mukund said. The players had returned the money to the manager after the match was called off. We have 15 players and eight support staff in the Bengal team and DA per individual is Rs 1500. We will also credit their DA to their respective bank accounts, CAB joint-secretary Avishek Dalmiya added.

Indian team players and support staff have been paid their full DA in advance, before the series. So there shouldn t be any problem. As for England, they have agreed to make their own arrangements and will take care of it, said BCCI secretary Ajay Shirke. 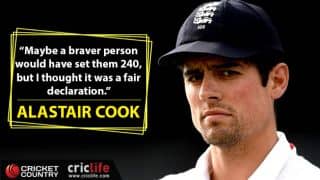