Jammu and Kashmir players were left dejected despite a four wicket win over 40 time Ranji Trophy champions Mumbai as they could not meet Sachin Tendulkar. Tendulkar was present at the Wankhede stadium as he oversaw his former side loose to a determined J&K side.

Tendulkar left the stadium immediately after quickly consoling the Mumbai side after their heartbreaking loss. The J&K side was waiting to meet Tendulkar, but it was bad luck for the team from the Valley that they could not meet the little master, ABP reports. “We didn’t know that Sachin paaji had come to the match. But after the news came in, the boys wanted to meet him, but that couldn’t happen. He had to leave the ground early owing to some other commitments,” Jammu & Kashmir captain Parvez Rasool.

It is believed that Tendulkar gave a pep talk to the Mumbai cricketers. But it was a golden opportunity of J&K, who played Mumbai for the first time, to meet the great batsman. “A few words from Sachin would have boosted our confidence. But since he had to leave for some meeting, we can’t really complain,” J&K player Hardeep Singh said. 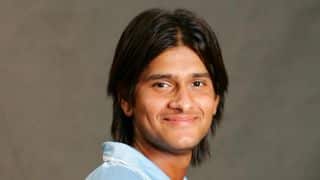