Rashid Khan has so far played 33 T20 games taking 56 wickets at an economy rate of shade less than six runs per over.

Hyderabad: Teenage leg-spinner Rashid Khan on Wednesday created history by becoming the first player from the war-torn Afghanistan to play an Indian Premier League (IPL) match. The 18-year-old was named in the playing XI of the defending champions Sunrisers Hyderabad (SRH) who took on Royal Challengers Bangalore (RCB) in the opening game of the season 10. Rashid was bought by Sunrisers for Rs. 4 crore making him an overnight star in his country. Known to bowl fast leg-breaks, Rashid has been in prime form during the recently concluded bilateral series against Ireland played at Greater Noida. Live Cricket Scorecard: SRH vs RCB IPL 2017, Match 1 at Hyderabad

He took five wickets in the T20 Internationals (T20I) and 16 wickets in five One-Day Internationals (ODI) and match-haul of eight scalps in the four-day game. He also hit a half-century in one of the games. Rashid has so far played 33 T20 games taking 56 wickets at an economy rate of shade less than six runs per over. Mohammad Nabi is the other Afghanistan player, but he does not feature in this match. Nabi was picked by SRH for a base price of 30 lakhs. SRH are the defending champions of IPL, incidentally beating RCB in the final of the tournament in 2016 at Bengaluru. RCB skipper Virat Kohli is not playing this match as he is nursing a shoulder injury. LIVE IPL 2017: Sunrisers Hyderabad vs Royal Challengers Bangalore IPL 10, Match 1

RCB are also without the services of KL Rahul and AB de Villiers for this match and as a result, Shane Watson is leading the side. David Warner-led SRH will look to get off to a winning start in this edition after they were put into bat by RCB. 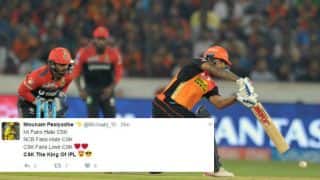 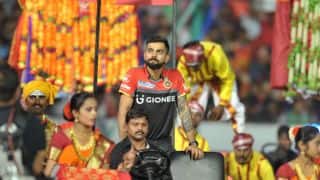 Virat Kohli: Will play only when I am 120 per cent fit