Rashid Khan will be making his Test debut, like the whole Afghanistan unit, against India having created a reputation for troubling the best in white ball cricket.

His lack of experience will not stand in Rashid Khan‘s road to success in the longest format as he has a “30-year-old mind in a 19-year-old body”, feels Afghanistan coach Phil Simmons. World’s premier T20 bowler will be making his Test debut against India having created a reputation for troubling the best in white ball cricket. However with only four first-class matches under his belt, it could be difficult against a top quality side like India.

Talking about Rashid, the former West Indies opener spoke about the leg-break bowler’s maturity beyond years. “Rashid is all of 19 but he has got the mind of a 30-year-old. He knows exactly what is expected of him. But yes, Mujeeb (17 years) is younger but we will have to see how he copes up with it,” Simmons said during an interaction today.

In Test cricket, patience will be paramount and Simmons expects that Rashid will replicate his first-class performance against India during the upcoming Test match. “It is about them (Rashid and Mujeeb) showing patience too along with our batsmen. Rashid did well against Ireland in four day cricket last year. He got wickets. He played against practice games against England and he got wickets.” It is not best preparation ahead of the historic Test but Simmons is working hard with the two squads simultaneously one that takes on Bangladesh in a three match T20 series starting here on Sunday and the other which will face the formidable India in the one-off game.

“It has been difficult with the T20 and Test squads training at the same time. But it is getting a bit easier as we are coming up to the game. That is how tours are planned now. You usually have Test matches first and then limited over series or vice versa. We just have to work around that,” said Simmons, who has been overseeing joint preparations at the Rajiv Gandhi International Stadium for close to two weeks.

The team was earlier training in Greater Noida before moving to its second home ground’ here ahead of the Bangladesh series. Going into the all important game against India, the team has not even played a competitive practice game as it is busy with the upcoming T20s.

“You are definitely right at that (about lack of warm-up games ahead of Test). Especially, playing the best team in the world (India) but that is how it is. I am not going to worry about. Though we did have a three day practice match here,” said the former West Indies all-rounder.

Afghanistan have gradually improved in every format they have played including four-day cricket. However, the fact that they have not got a taste of Test cricket makes the job all the more challenging. “The good thing is they have played four day cricket (winning ICC Inter-Continental Cup twice) . But it still doesn’t tell them how tough Test cricket is going to be. I don’t think that is something I can teach them. That is something they have to understand when they play. We have just tried to make sure that they understand that Test cricket is twice as difficult as an I Cup game. After the first Test match, they will know this level is so much higher and what they need to do to get to that level.”

The 55-year-old said the players are still going about their business and are not showing emotion on playing their first ever Test. “The reaction is still not there. It still has not sunk in yet. The emotional will hit them when they get to Bangalore. But I think they can handle the nerves. We have seen in the last five to six years that they have stepped up in every format that they have played.”

Simmons said the players will have to become mentally much tougher to succeed in Tests. “The biggest challenge is to make them understand what Test cricket is all about. It is different to four day cricket in a massive way. It is getting them to understand the mindset around Test cricket, the patience, how hard it is to score runs. With them it is a little bit technical and a lot more mental. Because you got to have played to understand how mentally tough it is to play for five days,” the former West Indies opener explained.

Simmons also feels that the bigger challenge will be for the Afghan batsman rather than the bowlers. “All we can try is to make sure their technique is as tight as possible. It will be much tougher for the batsmen than the bowlers who do get a second chance after being hit for a boundary,” he said.

Afghanistan will rely heavily on their spin department to be competitive against India. The squad has proven performers in likes of Rashid Khan and Mujeeb Zadran, who both excelled in the IPL. Zahir Khan is another spin option alongside Hamza Hotak.

The boys who played IPL are exceptional professionals. They know how to get ready for the Test match, said Simmons. Afghanistan are preparing for two high-intensity battles while fasting in the holy month of Ramzan. Simmons said fasting is hard but he respects the team’s culture.

“I was them with last year also. I have kept fast a couple of times so I understand how difficult it is. Their culture is something is they live with day in and day out. It is not the first time that they have played during Ramzan. It is their choice and I respect that, Simmons concluded. 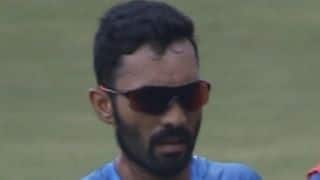