Batsman Javed Ahmadi and bowler Rashid Khan helped etch another history in the legacy of Afghanistan cricket as they helped their team defeat West Indies for the first time in One-Day Internationals (ODI).

Batsman Javed Ahmadi and bowler Rashid Khan helped etch another history in the legacy of Afghanistan cricket as they helped their team defeat West Indies for the first time in One-Day Internationals (ODI). Playing in the opening ODI of the ongoing three-match series at Gros Islet on Friday, Afghanistan first put up a decent 212 for 6 in their 50 overs and later went on to defend the runs to register a massive 63-run victory. Apart from Ahmadi and Rashid, Gulbadin Naib and Dawlat Zadran also rose to the occasion to bring Afghanistan the first victory of the tour. FULL CRICKET SCORECARD: West Indies vs Afghanistan, 1st ODI

After losing three Twenty20 Internationals (T20Is) on the trot in West Indies, Afghanistan chose to bat after winning the toss. Though they kept losing wickets frequently, Ahmadi held one side of the wicket and kept the scorecard ticking. Afghanistan s innings, contrasting to their usual hard-hitting style was very slow and after 20.5 overs, they had 68 for 2 on the board. Ahmadi, however, scored 81 while none of his peers went past half-century. Gulbadin, who batted at No. 8, was the second highest contributor to the scorecard with his quick-fire 41 off 28.

Ashley Nurse was the pick of the bowlers for West Indies with a couple of wickets. Shanon Gabriel impressed with his 8 overs, keeping his economy to 2.62 and bagging a wicket.

While the chase seemed to be an easy one for the hosts who have been dominant on the tour, the bowlers pulled off a terrific job in the other half. West Indies lost their first wicket in the second over as Dawlat removed Rovman Powell for 2. Evin Lewis and Shai Hope built up a decent partnership following the wicket but before the team could reach 50, Lewis was dismissed by Naib. However, it was Rashid Khan who was the star of the match. Rashid picked up two wickets with his first two deliveries and later on went on to bag 7 wickets and restrict West Indies to 149, handing his side a 63-run victory.

Rashid, with his spell of 7 for 18, registered the best figures as an Afghanistan as well as associate nation cricketer. This is also the fourth instance in ODIs that a bowler registered a 7-wicket haul. 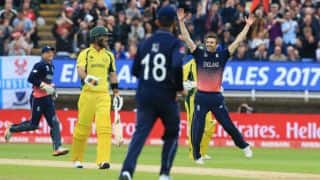