Rashid, who earlier in the day had made a match-winning 57 not out off 32 balls, took 2/13 in nine overs against Bangladesh.

The legspinner Rashid Khan, on his 20th birthday, overtook veteran Mohammad Nabi to become the highest wicket-taker for Afghanistan in ODIs when he claimed his second wicket against Bangladesh in match six of the 2018 Asia Cup. However, Nabi equalled Rashid a brief while later, and the duo are now tied for the top spot with 112 wickets each.

Rashid, who earlier in the day had made a match-winning 57 not out off 32 balls, finished with 2/13 in his nine overs against Bangladesh as Afghanistan won by 136 runs at the Sheikh Zayed Stadium, Abu Dhabi on Thursday to top their group.

Rashid had made his ODI debut in 2015 against Zimbabwe and had become the fastest to 100 ODI wickets in just 44 matches, surpassing Mitchell Starc s record of 52 matches during the ICC Cricket World Cup Qualifier in March.

On Thursday, with the wicket of Mahmudullah in the 30th over, Rashid claimed his 112th wicket in his 49th ODI, thus going past past Nabi s tally of 111 scalps from 103 matches. Two overs later, Nabi picked Bangladesh skipper Mashrafe Mortaza for 0 to draw level.

Rashid was the Man of the Series in the the Ireland ODIs, which Afghanistan claimed 2-1. He had picked eight wickets in three matches in Belfast. He now has four wickets in the ongoing Asia Cup and leads the highest wicket-taker s tally in ODIs in 2018 with 42 from 17 matches at an average of 13.35. Second in the list is England s Adil Rashid with 36 wickets at 28.19 followed by Afghanistan s Mujeeb ur Rahman (34 wickets at 18.00).

With the win, Afghanistan continued their good form in the ODIs claiming their 13th victory in 17 ODIs played this year and will now face Pakistan in their first Super Four encounter on Friday. 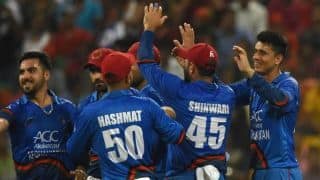 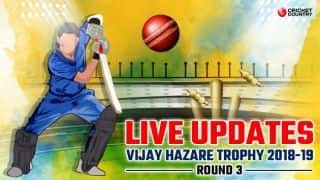