Currently, SRH are 138 for the loss of five wickets in 17 overs with Kane Williamson on seven.

Sunrisers Hyderabad (SRH) batsman, Ravi Bopara was dismissed for mere six after being bowled by all-rounder, Dwayne Bravo, against former champions, Chennai Super Kings (CSK) in match 4 of the Indian Premier League (IPL) at the MA Chidambaram Stadium in Chennai on Saturday. Currently, SRH are 138 for the loss of five wickets in 17 overs with Kane Williamson on seven and Karn Sharma on one. LIVE SCORECARD: Chennai Super Kings (CSK) vs Sunrisers Hyderabad (SRH) IPL 2015 Match 4

Earlier, CSK skipper, MS Dhoni won the toss and elected to bat first on a good batting track of Chennai as they finished on 209, piling on a brilliant 100 from opener, Brendon McCullum. Chennai Super Kings (CSK) face off Sunrisers Hyderabad (SRH) in Match 4 of Indian Premier League (IPL) 2015 at home in Chepauk, Chennai on Saturday. CSK are playing their second home game in three days, while SRH are playing their first game of the tournament. LIVE UPDATES: Chennai Super Kings (CSK) vs Sunrisers Hyderabad (SRH) IPL 2015 Match 4

On the whole, it should be an engaging contest between CSK’s batsmen and SRH’s bowlers. If Steyn and co. can go past Brendon McCullum, Suresh Raina, and the rest, SRH will be in with a serious chance. On paper though, CSK certainly hold the advantage going in and one can never discount the Chepauk advantage, after all. Indian Premier League (IPL) 2015: Complete coverage 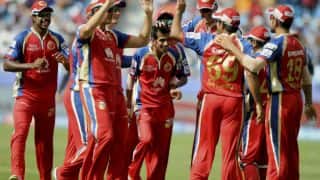