The decision was taken during BCCI's 85th AGM on Monday.

Ravi Shastri was axed from the governing council of Indian Premier League (IPL) by the Board of Control for Cricket in India (BCCI) during their 85th Annual General Meeting (AGM) which was held on Monday in Mumbai. The reason behind this step is most likely conflict of interest, which is being held as the top-most priority by the BCCI-led by the new chief, Shashank Manohar . A lot of harsh decisions were taken by Manohar during the meet. Also, Roger Binny was sacked as the national selector. His conflict of interest arises as his son Stuart Binny is a member of the Indian team, and was picked for the recent One-Day International (ODI) and Twenty20 International (T20I) series against South Africa. READ: Roger Binny sacked as national selector following BCCI AGM

N. Srinivasan, the former BCCI president, was removed as ICC Chairman and Manhohar is set to replace him in the elite post. Srinivasan who was elected as the ICC chairman in 2014 for a two-year-term did not attend the meeting and Tamil Nadu Cricket Association was represented by their vice-president PS Raman.

According to Indian Express, a source said, “A consensus among board members, in favour of new BCCI president Shashank Manohar taking over as ICC chief, is expected to be reached at their annual general meeting in Mumbai on November 9.”

Shastri was in news recently after Mumbai Cricket Association (MCA) curator Sudhir Naik had filed a complaint against him for abusing the latter after South Africa piled up 438 runs in the fifth and final ODI at Wankhede Stadium on October 25. However, Naik eventually withdrew his complaint following MCA vice-president Dilip Vengsarkar advicing the duo to bury the matter which he said, “was a result of misunderstanding between the two former Mumbai players”. 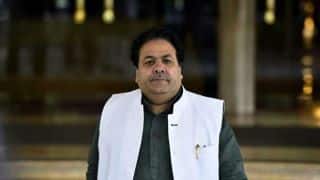