Shastri admits the task will be a challenge, but the 57-year-old said he will relish the opportunity.

Ravi Shastri‘s re-appointment as the head coach of the Indian cricket team was the most expected result yesterday when the BCCI-appointed Cricket Advisory Committee (CAC) made the announcement after a concluding the day long interviews with the five candidates (Phil Simmons backed out due to personal reasons).

Now, in his second term, Shastri, under whom India have won 11 out of 21 Tests, 43 out of 60 ODIs and 25 T20 Internationals out of 36, has a tricky job at hand. With two ICC tournaments in the next two years 2020 T20 World Cup in Australia and the 2021 T20 World Cup in India he will not only have the pressure of ensuring at least one of the two trophies, if not both, enter India’s cabinet, but will also have to see to the smooth transition of the team.

Shastri admits the task will be a challenge, but the 57-year-old will relish the opportunity and has a strong endeavour to see Team India leave a legacy behind.

“The next two years is to see a smooth transitioning happening. You will get a lot of youngsters coming in specially into the white-ball set-up. There will be youngsters coming in into the Test match set-up as well. You may need to identify another three to four bowlers to add to the pool, those are the challenges, so that the team, at the end of my tenure, at the end of 26 months, my endeavour would be to leave the team in a happier place so that they can set a legacy for time to come,” Shastri, who pipped strong contenders like Tom Moody and Mike Hesson for the post, said in a video uploaded by BCCI on Saturday.

Shastri knows that results may not go their way specially when time comes to investing in youth and he’s ready for those results.

“There’s no other way, you have to. Unless you make those efforts even at the cost of certain results. At the end of it, you will not know what’s your best set up is. There is a time you got to invest in getting youth into the side, in ensuring you have better combinations and better depth all round,” he explained.

Going ahead, another aim of Shastri’s is to ensure Virat Kohli and Co become the best fielding side in the world.

“The most important thing is that over the last four to five years, the biggest improvement has been in fielding and the endeavour is to make this team the best fielding side in the world. So, it is a clear diktat to whoever wants to play for this team, the standards of that particular player’s fielding will have to best of the highest level specially in white-ball cricket,” the coach made it crystal clear.

While results are imperative, Shastri has urged his players to learn from their mistakes.

“You got to learn from your mistakes. Nobody is perfect. When you strive for excellence and you strive to raise the bar day in and day out, then you got to pay attention to that detail, when you do mess up or you have an off day, don’t let that day go by. In fact, make sure you are focussing and concentrating on how you can get over that barrier. So, that will be the endeavour of this team. It’s been superbly consistent. When you look at their performances over the last two to three years, it’s been simply outstanding. But like I said, that’s the path they have set, now it’s up to them to raise the bar,” he said.

Enlisting the team’s achievements, Shastri was proud that his team’s confidence has now grown when they play away from home.

“If you look at white-ball cricket, they have had the belief now that they can travel and beat sides. They have beaten every side in their own country. They have had some great moments in Test match cricket as well like winning the series in Australia, losing a close one in South Africa, but that was a learning curve.

“I know we lost, the results will show, we lost badly in England, but we’ve got to learn from that. That also strengthens us, I kept saying that the scoreline really doesn’t tell the true story, but it is a scoreline, I will have to go by that, I will have to believe on how I can improve on that as a team and as a coach. I’m sure the players are thinking in the same fashion.”

The challenges are there and the Mumbai veteran is confident to sail through it all. “I am not going to be here if I didn’t think this was not a challenge. I relish the challenge. The game has taught you to never back away from a challenge, mental framework is such is that you want to embrace the challenge and look it straight in the eye and go out there and compete. We will be looking to do exactly wherever we compete. We believe wherever go, it’s home. So, just go and think in that fashion,” he said.

He also thanked the Kapil Dev-led CAC for having the faith in him to continue. “It’s a privilege and honour to be part of an Indian team set-up because the reason why I came in is that I had a belief in this team. I had a belief that they could leave a legacy which very few teams have left behind in years to come,” he said.

“Not just for the moment they are playing, but at the end of it, the kind of legacy which other teams going down decades would want to try and emulate. So, that is the desire, we are on track. There is always room for improvement and with youth coming in through the ranks, I think it’s very exciting.” 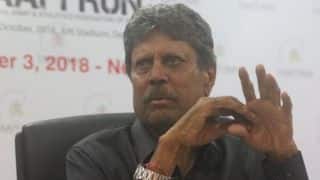 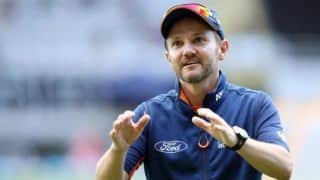