Team India head coach Shastri shared a photo of his receiving the COVID-19 vaccine at Apollo hospital in Ahmedabad on Tuesday morning.

The Indian cricket team’s head coach Ravi Shastri on Tuesday shared a picture of himself of receiving the COVID-19 vaccine at Apollo hospital in Ahmedabad. Shastri received the first dose of the COVID-19 vaccine at the hospital. The 58-year-old, who is currently with Team India for the four-match Test series versus England, thanked the staff at the Apollo Hospital for their co-operation and support.

“Got the first dose of COVID-19 vaccine. Thank you to the amazing medical professionals & scientists for empowering India Flag of India against the pandemic, the former India all-rounder Shastri tweeted.

India’s inoculation drive entered its second phase on Monday in which the coverage was expanded to include everyone above 60 and those over 45 with co-morbidities.

“Extremely impressed with the professionalism shown by Kantaben & her team at Apollo, Ahmedabad in dealing with COVID-19 vaccination,” the Mumbai-born further wrote in his appreciation Tweet.

Got the first dose of COVID-19 vaccine. Thank you to the amazing medical professionals & scientists for empowering India ?? against the pandemic.

Extremely impressed with the professionalism shown by Kantaben & her team at Apollo, Ahmedabad in dealing with COVID-19 vaccination pic.twitter.com/EI29kMdoDF

However, it is not immediately known whether any other member of the Indian team’s support staff was inoculated.

The Indian cricket team is locked in a Test battle against England.

The fourth and final Test of the rubber will start in Ahmedabad on Thursday. India currently have an unassailable 2-1 in the series after they lost the opening Test in Chennai.

India captain Virat Kohli has recorded another century, albeit not on the pitch this time, as he became the first cricketer in the world to have 100 million followers on social media platform Instagram.

The 32-year-old Kohli is also the first person in the Asia-Pacific region to achieve the feat.

Kohli is also the fourth most followed sportsperson on Instagram. Portugal football star Cristiano Ronaldo tops the chart with 265 million followers, ahead of Argentina football captain and FC Barcelona legend Lionel Messi and Brazil’s Neymar, who are second and third in the list with 186 million and 147 million followers respectively. 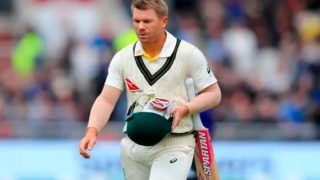