Ravichandran Ashwin picked up his 19th 10-wicket haul in the first Test against New Zealand at Kanpur.

Kolkata: Legendary India tweaker Erapalli Prasanna on Monday rated off-spinner Ravichandran Ashwin as the best spinner in the cricket world. Ashwin became the second fastest ever and the quickest Indian to reach 200 Test wickets when he got rid of New Zealand captain Kane Williamson in the first Test in Kanpur on Sunday. The Tamil Nadu off-spinner finished with a six-for in the second innings to help Virat Kohli’s men pummel the Kiwis by 197 runs to take a 1-0 lead. “It is a remarkable performance. Ashwin is the best off-spinner available on the cricketing scene at the moment,” Prasanna told IANS over phone on Monday. This was Ashwin’s 19th five-wicket haul. The 30-year-old finished with innings figures of 6 for 132 and match figures of 10 for 225 in 66.2 overs.

“The man who started as a batsman who could bowl has now become a bowler who can bat. The journey has been amazing. India is extremely lucky to have him as their prime spinner,” said Prasanna, who scalped 189 wickets in 49 Test matches. Asked how Ashwin can carry his home form in overseas games, Prasanna said, “Whatever he has achieved and the number of Tests he has played will help him be a better bowler on overseas wickets. I think he will prove people wrong that he cannot take wickets outside India. “He is an intelligent bowler. He has got a good cricketing brain. He needs to be consistent overseas and I’m sure he will sort it out.” Besides his bowling, Ashwin is also a No 6 batsman. Has he got too much on his plate? “He is a gifted batsman. It helps that he started out as a batsman-cum-bowler. He has realised his potential with the bat and that was for all of us to see in the West Indies.

“Now he has to have confidence to bat in England when conditions will be more testing. But primarily he has to become a bowling all-rounder and not the other way round. If I were him I would rather do that. He has to win matches by taking wickets.” Prasanna stressed on the importance of the No 6 batting position. “No 6 is a very dicey position. When you tour places like New Zealand, England you need to be a useful contributor in partnerships and bail out the side in crucial junctures,” he said.

“Teams will attack Ashwin as No 6. He needs to tackle that. For the moment, let’s stick to the fact that he is doing exceedingly well as a bowler and on slower wickets he is getting runs.” 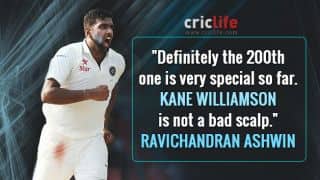