Ravichandran Ashwin completes career double of 2,000 runs and 200 wickets; becomes second-quickest Indian to do so

Ravichandran Ashwin achieved this feat with a six downtown.

Ravichandran Ashwin came down the track, walloped Rangana Herath over his head, and completed 2,000 Test runs with a six. More importantly, he became the fourth-quickest (51 Test) to reach the career double of 200 wickets and 2,000 runs, only behind Ian Botham (42 Tests), Imran Khan (50), and Kapil Dev (50). Of Indians, he is the fourth overall to attain this feat, after Kapil, Anil Kumble, and Harbhajan Singh.

Ashwin is more of a series-winner. He has been adjudged Man of the Series 7 times in the 18 series he has played in — the most for India, ahead of Virender Sehwag (5) and Sachin Tendulkar (4). He needs only 4 more of these to surpass Muttiah Muralitharan (11), the topper of the Man-of-the-Series list. Given that he is only 30 and he will play many more matches on the spinner-friendly Indian tracks, Ashwin may as well ace the list. 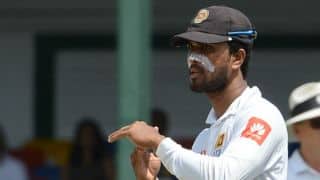