The spinner was included in the playing XI for the first time in this five-match series.

India off-spinner Ravichandran Ashwin has expressed hope that one of their bowlers will step up on second day to prevent England from running away with the fourth Test and also expressed his disappointment as he got out after getting set. India were bowled out for a paltry 152 in their first innings on day one and the hosts had managed to score 113 for three at stumps.

“You cannot put a number on this pitch,” said Ashwin, when asked if the wicket was really one where a team could be shot out for just 150-odd runs. He added, ” There was something in the wicket for the bowlers to exploit and they bowled really well. Maybe we could have got a few more runs, you always want more runs. But we did well to get those wickets in the end and we are still in the game.”

India had won the toss and were soon reduced to 8/4 within the first six overs as James Anderson (3 for 46) and Stuart Broad (6 for 25) ran through the batting line-up. “The wickets are pretty much similar in all the matches and the conditions were a bit different. So it was entirely the management’s call to bat first after winning the toss. In the end they bowled very well and used the conditions very well,” said Ashwin, talking about skipper MS Dhoni‘s decision to bat first under heavy cloud cover.

“There have been times in the Ranji Trophy when teams have made a similar start. Mumbai were 0/5 at one stage if I remember and then they went on to win. So I am personally drawing inspiration from that and I believe we are still in the game. I am just disappointed that I threw away my wicket because maybe I could have scored more runs,” he added.

The spinner was included in the playing XI for the first time in this five-match series. After sitting out in the first three Tests, he scored a crucial 40 runs and added 66 runs with Dhoni to help India avoid complete embarrassment.

“I don’t know how I feel about getting back again in the side. But when I went out to bat, I felt like a chicken out of the box. I was very scratchy when my innings started and the ball was doing too much. So I just tried to stick in there for a while and see what happens. But I am disappointed with the way I got out. I have only myself to blame for that. If we had more runs we could have put more pressure on them,” he said, after being trapped by a short ball from Broad and caught in the deep.

Ashwin though was full of praise for his captain who, despite an unorthodox technique, showed the top-order batsmen how to bat on this pitch. “Dhoni played a brilliant innings, a gutsy innings,” Ashwin said.

“The ball was going around and in fact it was kicking off good length. So when we got together, he asked me to play my game, and play my shots, because that was the way to go. There were hardly any runs on the board and we were looking to rotate the strike. We didn’t want to be sitting ducks in those conditions.”

England are now only 39 runs behind with seven wickets in hand and four days remaining in the game. The second morning becomes extremely crucial in this scenario.

“We are still very much in the game. We need to knock a few wickets in the morning and hopefully we will get some good conditions to support us as well. Varun Aaron bowled well in short bursts and he did well to get us those two wickets. We are hoping he can go and complete a five-wicket haul tomorrow,” Ashwin signed off. 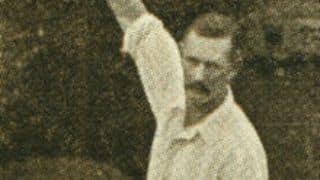