Ravichandran Ashwin took a total of 21 wickets in the three-match Test series.

Ravichandran Ashwin has scripted his name in record-books by taking most wickets by an Indian bowler in a Test series in Sri Lanka. He took a total of 21 wickets in the three-match series. He took 6-46 and 4-144 in the first and third innings respectively of the first Test which was played at Galle International Stadium. He followed it up with 2-76 and 5-42 in the second match which was played at P Sara Oval, Colombo. In the final match played at Sinhalese Sports Club, Colombo, he didn’t get enough opportunity to bowl in the first innings. However, in the fourth innings he added four wickets to his tally and gave just 69 runs. READ: Ravichandran Ashwin has potential to take 600-700 wickets in 100 Tests, opines Muttiah Muralitharan

The best part of Ashwin’s performance in the recently concluded series was the off-break bowler’s strike rate. He took each wicket off his 33rd ball on an average. This is in contrast to his career strike rate of 62.35. Ashwin took a ten-wicket haul in the first match. The right-arm spinner has emerged as India’s trump card in Sri Lanka. Ashwin has a very good average too in the series and has given just 19 runs for taking each wicket. Ashwin has taken 145 wickets in total in 28 Tests he has played. Amit Mishra supported Ashwin pretty well in the series and took 15 wickets and he has become the third highest Indian wicket-taker after Ashwin and Harbhajan Singh (who took 16 wickets in India vs Sri Lanka 2008 series) in a series in Sri Lanka. 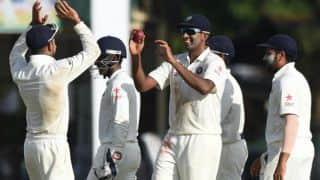