Ravichandran Ashwin has in latest ICC Test rankings for bowlers has risen up to number 2 spot.

New Delhi: India‘s red-hot spinner Ravichandran Ashwin will look to pile on the agony for South Africa in the final Test in New Delhi starting Thursday on a pitch expected to cause more problems for the tourists. The 29-year-old has risen to number two in the world rankings following his heroics in last week’s third Test in Nagpur when he recorded match figures of 12 for 98, giving India an unassailable 2-0 series lead. Ashwin has taken 55 wickets since the start of the year, more than anyone else in Test cricket, and has been near unplayable on the rank turners that have bamboozled South Africa’s stellar batting line-up. LIVE SCORECARD:India vs South Africa, 4th Test match

“He is a world class spinner, probably the best in the world right now,” India captain Virat Kohli said in the aftermath of Ashwin’s performance in Nagpur. “He’s stepped up in a big way for us, even in (the last series against) Sri Lanka. He is one of the main reasons why we’ve been able to win back-to-back series,” added Kohli. Both India’s victories in Nagpur and Mohali have been wrapped up inside three days, and South Africa were also bowled out cheaply in their only innings in the rain-affected second Test in Bangalore which was drawn.

The Proteas’ most reliable batsmen, Hashim Amla and A B de Villiers, have managed one half century between them in the series while no one has made a century. The likes of Dean Elgar, Stiaan van Zyl and Faf du Plessis, who are all on their first tour of India, have fared little better. Amla has admitted that it has been a struggle for the batsmen in conditions he says have been some of the most challenging he has ever faced. “I think the wickets have played their part in making it very difficult for all the batters,” said the South African skipper. While they remain the world’s number one Test team, the tourists have had to endure the disappointment of losing their first series abroad in nine years. ALSO READ: Kepler Wessels: South Africa should not blame pitched for series loss against India

While they will be desperate to avoid a 3-0 scoreline, the Ferozeshah Kotla pitch is expected to pose similar challenges for the Proteas who have struggled to produce a top-class spinner of their own. “I would hope the one in Delhi is absolutely the same. I have no qualms about it,” the Indian team director Ravi Shastri told the Cricinfo website, saying it was up to batsmen to adjust their technique.

“Which rule tells me that a ball can’t turn on day one? Where does it tell me in the rule book it can only swing and seam?,” said Shastri. South Africa’s cause has not been helped by the absence of their pace spearhead Dale Steyn, the only bowler above Ashwin in the world rankings. Steyn, nursing a groin strain, has bowled just 11 overs in the series and it looks unlikely the visitors will risk him in a dead rubber. ALSO READ:Faf du Plessis: Indian pitches dictate the way one plays and performs

The performance of Steyn’s usual strike partner Morne Morkel has been one of the few bright spots for the visitors and he was the pick of the South African bowlers in Nagpur. While India’s line-up is expected to be unchanged, South Africa could be tempted to hand back-up seamers Kyle Abbott and Marchant de Lange a chance to impress ahead of the upcoming home series against England and give Kagiso Rabadagive a rest. 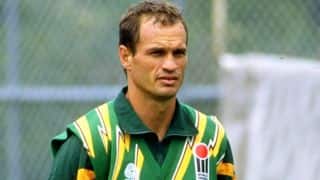 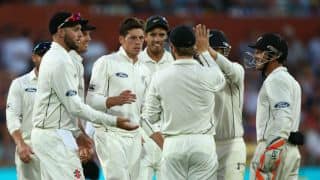