Reports suggests Darren Lehmann could resign as Australia coach while Smith and Warner are likely to be slapped with 1-year ban.

Several former and current cricketers have condemned Steven Smith, Cameron Bancroft and leadership group s ball-tampering act during the third Test against South Africa. Bishan Singh Bedi termed the incident a modern day cricket tragedy. Harbhajan Singh had slammed ICC for being lenient towards Australia for the punishments meted out. Ashish Nehra, on the other hand, was saddened by the incident yet wants ICC to penalise Smith as well as David Warner. Sourav Ganguly, too, lashed out on Smith and Bancroft calling the act stupid.

Ravichandran Ashwin has a different take on the incident. Ashwin, who was in Mumbai for an IPL promotional event, believes the incident would not have come to light had it not been for all the cameras involved.

Ashwin said: It s very difficult sitting at a distance and commenting on what might have happened in the dressing room. These things happen in the heat of the moment. I m not trying to stand for it but the fact remains that [cricket] is entirely tech-driven and you have to be extra careful especially when you are in the public eye and have the responsibility to carry out yourself in the utmost dignified manner as possible, as quoted by Indian Express.

Rohit Sharma, who was also present in the event, wished not to comment on the incident but echoed the same thoughts as Ashwin: That is one of the disadvantages of technology growing so much I would say it is literally dictating play in terms of cricket and life for everybody. If technology hadn t gone this far, we would not be talking about this so much.

CA have begun their investigation on the incident and has asked none of the Australian players as well as members to leave Cape Town. An update on Smith will be out on Wednesday morning. In the meantime, reports suggests Darren Lehmann could resign as Australia coach while Smith and Warner are likely to be slapped with 1-year ban. 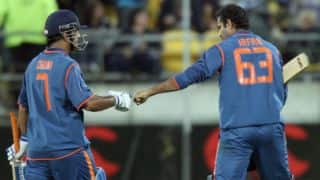