Ravichandran Ashwin has been rested, along with Ravindra Jadeja, for the upcoming T20I series against England.

After being rested for the three-T20I series against England, India‘s star off-spinner Ravichandran Ashwin returned to his hometown, Chennai, on Monday. Nonetheless, with the massive protest happening in town due to the Jallikattu ritual, he had to avail to public transport to reach his residence safely. Ashwin’s car was stuck in traffic, paralysed by the ongoing protests and could not reach in time to pick him up. As a result, the 30-year-old initially thought of walking back home but decided against it because of security concerns. Finally, Ashwin resorted to using the Chennai metro with “timely help” from police and a friend.

According to Times of India, The ICC Cricketer of the Year 2016 was thankful to police for their timely help. “When my manager contacted the police for security, they offered support immediately. I want to thank the assistant commissioner of police Vijay Kumar and the CISF personnel (two escorts) for their timely help and the manner in which they made me feel comfortable. It was great travelling with fellow Chennaiites on metro rail,” stated Ashwin. He rode the metro till the point where his car was waiting and eventually reached home. He even shared a picture on social media about the incidence. FULL CRICKET SCORECARD: India vs England, 1st T20I at Kanpur

Such situations dictate usage of the public transport, thank the airport police for taking me through safely

With unrest witnessed in the city due to Jallikattu, Ashwin hoped for things to get back to normal soon.

Ashwin featured in the recently-concluded three-match ODI series against England wherein India emerged champions by 2-1. Hosts won the series opener by 3 wickets in Pune and followed it up with another clinical performance in Cuttack to seal the fate of the series then and there. The last ODI was held in Kolkata wherein hosts lost by 5 runs to handover the visitors their first win of the tour.

The three-T20I series will begin from January 26 with the first match to be held in Kanpur. Ashwin and Ravindra Jadeja have been rested, keeping in mind the forthcoming Australia series, and Parvez Rasool and Amit Mishra will replace them. 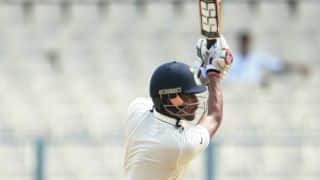