With India finally winning it, the Twitterati broke the internet with some interesting tweets on the Indian win.

A yet another clinical performance from Team India saw them win the third and final Test against New Zealand at Indore on Day four by 321 runs. Team India, thus, won the three-match series 3-0. Captain Virat Kohli continued with his unbeaten run, as the Indian team is yet to be beaten in a Test series under him. Once again, off-spinner Ravichandran Ashwin emerged as the hero of India s win as he scripted yet another downfall for the opposition. He completed his 21st five-wicket haul by taking seven for 59 in the fourth innings and in the process added another milestone to his ever-growing list of records.

Ashwin has emerged as the biggest match-winner for Team India in Tests after current head coach Anil Kumble. In this particular game, he was well supported by the Indian batsmen too. Being held in the central Indian city of Indore, the Test was first match being played at the Holkar Stadium in the city, thus making it India s 22nd Test venue. It witnessed skipper Kohli score his second double ton of the career (211). His deputy Ajinkya Rahane also made the Test special with his knock of 188 and a record fourth wicket partnership with Kohli.

In the second innings, Gautam Gambhir scored a fifty while Cheteshwar Pujara finally got a hundred. Rohit Sharma also got a fifty in the first innings while Ravindra Jadeja, Mohammed Shami and Umesh Yadav contributed in the bowling department, thus making it a collective team effort. With the win, Team India s captain Kohli earned the ICC Test mace as his side toppled Pakistan to become the No. 1 Test team. All-in-all, Indore s maiden Test truly became a special and memorable one.

The Test remained top-trending topic during all the four days. And with India finally winning it, the Twitterati broke the internet with some interesting tweets on the Indian win. We bring to you the best of those tweets here:

Congratulations #TeamIndia for the outstanding victory!!!!!! Good chance to own the No 1 spot for many years to come. Good luck! pic.twitter.com/pqWCNMOWW3

Often in life, you have moments when you are made to feel the world is rooting for you. Thank you for your love and support. Humbled. Gautam Gambhir (@GautamGambhir) October 12, 2016

Always been one of my dreams to be a part of the No 1 Test team.A feeling I’ll cherish always.Great work team India pic.twitter.com/UAIfl7gdxA

I feel Ravi Ashwin has earnt the right to feel he has his game in reasonable knick 13/140 #IndvNZ test 207 wkts in 38 tests #Spinology Damien Fleming (@bowlologist) October 11, 2016

Another win at home for India over NZ, this time by 321 runs with Ashwin picking up wickets for fun. 5 Test challenge for Eng will be huge.

The way @ashwinravi99 is bowling I’m sure the records will keep breaking,Well done buddy AGAIN #IndvsNZ

India were favourites and they’ve played like favourites. England will be tougher.

Anil Kumble @anilkumble1074 starred in two clean sweeps under Azhar. This one will take him back to his own time #IndvsNZ

Well done team @BCCI. Winning with a clean sweep #INDvNZ Test Series is a domination. Congratulations! To to all

The two teams will now meet in the first of the five-match One-Day International (ODI) series on October 16, which Team India will play under MS Dhoni. 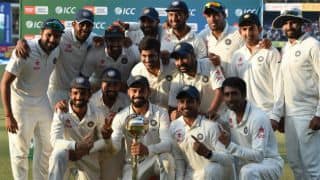