This is Jadeja's first half-century in Test cricket.

Ravindra Jadeja has scored his first half-century in Test cricket. He achieved the milestone during the second Test between India and England at Lord’s. Jadeja walked in when India were in trouble as they lost MS Dhoni and Stuart Binny in quick succession. And to make matters worse, they then lost Murali Vijay for 95.

Jadeja has been in an aggressive mode and got to his half century in 42 balls. This is so different from his performance in the second innings at Nottingham. Back then, he needed 38 balls to get off the mark. And, here he took only 42 balls to get his first Test half century. The best part was the way he celebrated his milestone. He swished the bat around like a sword. 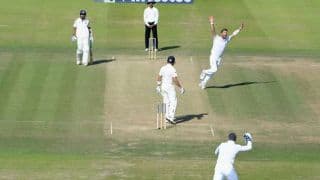