Anderson faces his hearing after the ongoing Southampton Test.

The Ravindra Jadeja-James Anderson controversy has taken a new turn as some ‘incriminating video evidence’ has surfaced which is in favour of the Indian all-rounder. Anderson is set to face his hearing after the ongoing Test at Southampton for allegedly pushing Jadeja during the Nottingham Test. Jadeja was, last week, fined 50 percent of his match-fee for his alleged involvement in the incident.

The Indian Express reported that the BCCI’s representatives had found the video evidence which is of incriminating nature. It is said to be a footage of the whole altercation that is said to have occurred at Nottingham. Earlier, such a footage was not with BCCI as they were told it wasn’t available. It is also reported that Indian captain MS Dhoni and the others who are related to the hearing will remain in Southampton after the Test, even as the rest of the Indian team will go to Manchester, which is the venue of the next Test.

Last week, Dhoni had expressed his dissatisfaction at match referee David Boon’s verdict to fine Jadeja 50 percent of his match fee. He had said, “If someone is saying something from behind, you turn around it is not aggressive. Especially because the bat was under his arm throughout, and from the time lunch was called till we entered the dressing room, not one word was spoken by him. It’s for you to decide, when it comes to the factual matter, whether what Jadeja did was aggressive. That’s the reason I am very hurt by the verdict.” The International Cricket Council (ICC) then warned Dhoni against making such comments.

Though a Level One offence cannot be appealed, India did win the right to get the appeal through. The ICC will also consider taking the fine away. 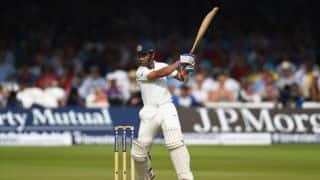