Ravindra Jadeja had the best figures amongst the five Indian bowlers ending with 3 for 86 from 30 overs.

Rajkot: Ravindra Jadeja on Thursday stood firmly behind under-fire spinner Ravichandran Ashwin stating that it’s not the responsibility alone of the Tamil Nadu tweaker to get to get all the wickets. On first two days, there wasn’t great help for the spinners from the SCA Stadium track. Ashwin went for 167 runs from 46 overs with only two wickets to show for his efforts as England scored 537 with help of centuries from Joe Root, Moeen Ali and Ben Stokes. “We have five bowlers and all five bowlers have the responsibility and not only Ashwin. As it happens sometimes chances go down, it’s all part of the game. Everyone is responsible in equal measure.” Jadeja had the best figures amongst the five Indian bowlers ending with 3 for 86 from 30 overs but on the second day got to bowl only 9 overs. Full Cricket Scorecard: India vs England 1st Test at Rajkot.

Asked about it, the local lad sidestepped the issue. “That was captain’s thinking. He must have had his own reasons looking from the team’s point of view. I don’t think it was his plan to deliberately bowl [Ravichandran] Ashwin and [Amit] Mishra more.” While praising the hundred made by Stokes, he also pointed out that the left-hander was dropped twice by Wriddhiman Saha on individual scores of 60 and 61 respectively. “He played very well and played according to merit. Initially, he was struggling against Umesh [Yadav], but after that he played calmly. Whenever a catch has been dropped, it has often happened a batsman will go on to score a century.

Stokes got two chances and then a few fell in no man’s land, but these things are common in cricket.” Jadeja also felt that losing the toss was crucial here. “I think the toss [that India lost] took away the game [from us]. Everyone knows that on the first two days the Rajkot wicket suits batsmen and after that the spinners come into play. That’s all I can say,” added Jadeja when asked out of the three century knocks which one was the most crucial one. India vs England, 1st Test: India reply solidly after England pile up 537

“As the game progresses, pitch will get slower. From one end, where there are some foot marks, deliveries can spin. But the middle portion has remained the same. Yesterday and today, the fast bowlers had some help but over the next few days the wicket will become slower,” he added. He looked optimistically after India were kept on the field by England for five sessions. “We now have to make the runs put on board [by England]. READ: Moeen Ali urges England to be patient against India on Day 3, 1st Test

Tomorrow is crucial for us we have to play positive cricket. We have to play normal cricket according to the merit of the ball,” said Jadeja, after the second day’s play at the SCA Stadium. Asked about England’s superb batting display here as compared to their losing all ten wickets in the second Test against Bangladesh in Dhaka, Jadeja said that the two tracks were totally different in nature. “The surfaces are different – Bangladesh and here. There the ball was turning sharp and here the odd ball was turning yesterday and today. Both surfaces are very different,” he said. 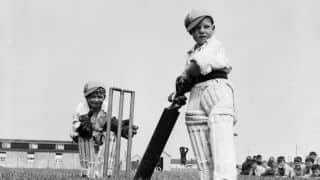