National selectors on Wednesday wielded the axe mercilessly, showing exit door to three under-performing all-rounders after having a serious discussion with coach Duncan Fletcher before announcing the squad for Sri Lanka tour. 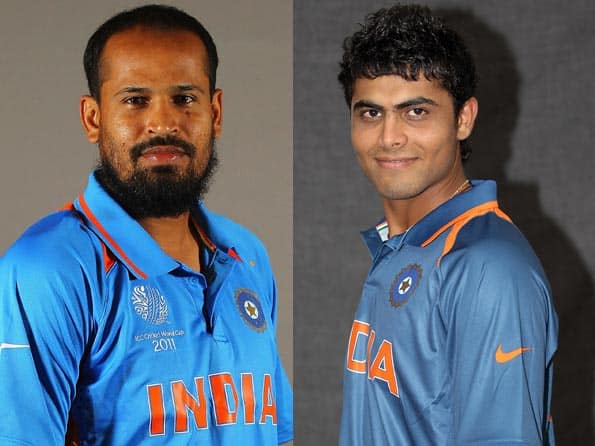 National selectors on Wednesday wielded the axe mercilessly, showing exit door to three under-performing all-rounders after having a serious discussion with coach Duncan Fletcher before announcing the squad for Sri Lanka tour.

The five-member selection panel headed by Krishnamachari Srikkanth omitted Pathan brothers Yusuf and Irfan along with out-of-form Ravindra Jadeja from the 15-man squad.

Sachin Tendulkar has made himself unavailable for the short series involving five ODIs and a lone T20 game against the hosts commencing July 21, while medium pacer Praveen Kumar is another player who has been dropped.

All four dropped players were part of India’s unsuccessful Asia Cup campaign in Bangladesh in March, where India failed to reach the final.

Srikkanth, talking to reporters later, said the five selectors held a long discussion over the happenings in the last season that saw India being humbled 4-0 in England and Australia in the Tests and also failing to live up to the one-day world champions’ tag in the two countries as well as in the Asia Cup that followed in Dhaka.

“One good thing is that we had Indian cricket team coach Duncan Fletcher with us. We had a lot of discussions about the pros and cons, about what happened, what did not happen, what’s true and what’s not true.

“It was a very healthy discussion with Duncan Fletcher.

We wanted to sort out everything and make sure this season starts with a bang,” he explained.

Left unsaid was the controversy over the rotation policy practiced for seniors during the Australian tour which saw captain Mahendra Singh Dhoni and his senior teammates Virender Sehwag and Gautam Gambhir singing different tunes over its introduction.

Dhoni did not attend the meeting and, according to selection panel sources, is in the US.

Srikkanth expressed confidence that the Indian team would put behind its ordeal in England, Australia and Bangladesh and return to winning ways with a bang during the season opening tour of Sri Lanka.

“We are looking forward to this particular season. Being the first tour of the season, we really wanted the best possible team. Of course, Sachin Tendulkar is not available.

He’s starting off from the New Zealand series. So, we have selected the best available team based on the performance,” said Srikkanth.

“I think it is a very good side. Don’t forget, we have a strong batting line up and good bowlers…(like) Zaheer Khan and everybody. We (selectors) are confident of doing very well in Sri Lanka,” he declared.

“Of course, we also have T20 World Cup coming (between September 18 and October 7 in Sri Lanka) up. We also have New Zealand coming for a series (sandwiched between the two visits to Lanka) and then England coming (end of year). We have a long season ahead and by God’s grace, we will come back to winning ways,” added the former dashing opener.

The 15-strong side will have the services of the fit-again key trio of Virender Sehwag, Zaheer Khan and Umesh Yadav who had been left out of the Bangladesh trip due to fitness concerns. Sehwag was nursing back spasms and a shoulder injury, whereas Zaheer and Umesh too had niggles.

Tendulkar, who has played only two ODI series since the 2011 World Cup and is now a Rajya Sabha MP, has been replaced by young Mumbai batsman Ajinkya Rahane while left-arm spinner Pragyan Ojha and Yadav have replaced the out-of-form Jadeja and Praveen Kumar respectively. (PTI)

Rahul Dravid expresses concern about the future of Test cricket