Ravindra Jadeja was the most impressive bowler in the penultimate Test versus Australia at Ranchi.

With a 9-for in the drawn third Test against Australia, India’s Ravindra Jadeja tops the ICC bowlers’ rankings. He replaces countryman, Ravichandran Ashwin, who was tied with the left arm off spinner with 892 points before the match. However, Jadeja not only outplayed the opponents’ spinners but also got the better of Ashwin in terms of number of dismissals to reach the pinnacle of ICC Rankings. Jadeja had a 5-for in the first innings and troubled the Australians on the final day as well; claiming 4 scalps in the second essay. After having a 152-run lead, India drew the third Test versus the visitors as they played out the final day to enforce no winner. FULL CRICKET SCORECARD: India vs Australia, 3rd Test, Ranchi

Both the sides will now move to the fourth and final Test, to be played at Dharamsala from March 25. India and Australia have all to play for, with the series tied at 1-1. Nonetheless, the Indian camp would be pleased with Jadeja’s all-round efforts at Ranchi. He had a ball in the entire contest. He not only was the most economical bowler in both the innings, but also got a quickfire fifty to stretch India’s lead on Day Four.

Jadeja also became the first Indian to claim 100 wickets on home soil under an impressive average (19.87). The list comprises of yesteryears’ greats like Jim Laker, Muttiah Muralitharan and Wasim Akram. Ashwin is the only other Indian in the top 20 (19th spot). With as many as 21 wickets (also the highest wicket taker) in the Border-Gavaskar Trophy 2016-17, Jadeja will be expected to make further inroads in the opposition line-up in the series decider.

The ICC Test rankings has Sri Lanka’s Rangana Herath at the third position followed by Australia’s Josh Hazlewood and England’s James Anderson respectively. With all of them playing in whites at present, expect more changes in the rankings in near future. India vs Australia, 3rd Test, Ranchi: Marks out of 10 for Virat Kohli and Steven Smith-led sides 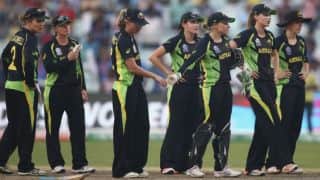