Ravindra Jadeja's highest List A score prior to this was 87.

Ravindra Jadeja scores his first List A century for Saurashtra in the match against Madhya Pradesh in the Vijay Hazare Trophy 2015-16 match, Round 2 at Rajkot. This was Jadeja’s 162nd game and has never managed to get to three-figures prior to this match. Jadeja has been in excellent form with the ball after a wonderful series in the Test series against South Africa. He had a very good season in the Ranji Trophy 2015-16, where he picked up 38 wickets from four matches and also scored a couple of half-centuries. Jadeja came in at No. 5 when Saurashtra were in a spit of bother. Live updates: Vijay Hazare Trophy 2015-16, Madhya Pradesh vs Saurashtra, Group D match at Rajkot

He first built a 135-run stand between opener Sheldon Jackson, who was later dismissed for a 108-ball 111. Saurashtra did not let the momentum slip as Jadeja built yet another excellent partnership with Chirag Jani, who scored an unbeaten 43-ball 77. Jadeja was finally dismissed off the final delivery of the innings for a 117-ball 134.

Jadeja’s international skipper in One-Day International (ODI) top-scored for Jharkhand with 44 but could not prevent his team from losing against Gujarat. Jadeja will hope that this performance of his warrants him a place in the Indian squad against Australia in January. India will then play a T20 International (T20I) series against Sri Lanka at home. The ICC World T20 2016 will then begin from March 8, 2015. India play their first match of the competition against New Zealand. Jadeja will hope that his he gets selected in all the upcoming series, given that he has performed well in the recent past. 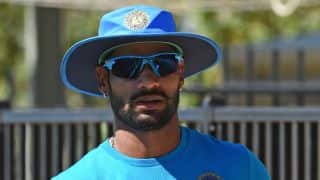 Shikhar Dhawan: I analyse bowlers before every match