West Indies were bowled out for 211 in the first One-Day International (ODI) against India at the Nehru Stadium, Kochi. The spinners dominated the show as Ravindra Jadeja took three wickets and Suresh Raina also accounted for the same number. For the West Indies, Darren Bravo was the top scorer with 59. 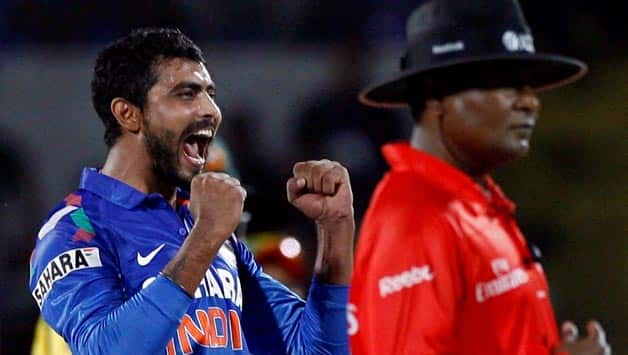 West Indies were bowled out for 211 in the first One-Day International (ODI) against India at the Nehru Stadium, Kochi. The spinners dominated the show as Ravindra Jadeja took three wickets and Suresh Raina also accounted for the same number. Ravichandran Ashwin also contributed with two for 42. For the West Indies, Darren Bravo was the top scorer with 59.

On a decent looking track, West Indies captain Dwayne Bravo won the toss and elected to bat first. Instead of Denesh Ramdin, they opted to play the extra batsman in Narsingh Deonarine. Sunil Narine and Jason Holder came into the side to form a bowling attack with Darren Sammy and Ravi Rampaul.

West Indies had a disastrous start to their innings when Chris Gayle was run-out off the second ball. He pushed Bhuvneshwar Kumar to the off-side and tried to sprint through for a single. However, Bhuvneshwar got across after completing his follow through and threw it to the non-striker’s end. Gayle was diving, but was found short of the crease. To make matters worse, he looked in severe pain and had to be taken off the field on a stretcher.

Johnson Charles and Marlon Samuels then took control of things by striking a few boundaries. Charles in particular was in great touch and laced the off-side with some good strokes. The duo was going very well and looked very comfortable against the seamers, but once the spinners came on, it was a different game altogether.

Jadeja struck in his first over when Charles lobbed a catch back and he dived to his left to take a magnificent catch. Then, Suresh Raina came on and he castled Samuels with one that stayed low and shattered the stumps. The wicket was offering assistance to the spinners early on and it was only a sign of things to come.

Lendl Simmons and Darren Bravo then helped West Indies recover and put up a decent partnership. Darren Bravo was in great touch and got things going with a six over long-off. Throughout his stay, he looked fluent and in control of the proceedings. However, wickets fell at regular intervals after Simmons was dismissed leg-before by Raina.

Dwayne Bravo came in and stroked 24 before being stumped off Jadeja. It happened just after Darren Bravo was bowled for 59 by Mohammed Shami.

From there on, there wasn’t much fight although Jason Holder took them to their eventual total.

There is plenty for the spinners on this surface and Narine may be licking his lips. Indians may have the tough task of contending with his mystery on this surface.