One can't take away anything from Cheteshwar Pujara's staggering 1316 runs from 13 games with four hundreds.

Dharamsala: Ravindra Jadeja emerging as a spin all-rounder for all Test match conditions and Umesh Yadav‘s transformation from ‘Mr Erratic’ to ‘Mr Consistent’ are the two big takeaways for India captain Virat Kohli after winning 10 out of their 13 Test matches at home this season. One can’t take away anything from Cheteshwar Pujara’s staggering 1316 runs from 13 games with four hundreds. Skipper Virat Kohli was on top of his game with 1252 runs comprising four successive double hundreds in four series before a poor Australia series. But Pujara and Kohli have been performers in the past as well but it was Jadeja and Umesh, who stand tall after a great home season. FULL CRICKET SCORECARD: India vs Australia, 4th Test at Dharamsala

With 556 runs and 71 wickets from 13 games, Jadeja himself has started believing that he is now a competent longest format man as much sought as he has been in shorter formats. “There’s self-satisfaction and now I am suitable for both formats and the confidences inherently increases that I can back myself as a longer version player. My shoulder is on auto-mode and everything is happening automatically,” Jadeja had said on his match and series winning performance in the fourth Test.

For Kohli, Jadeja could be his Go To man when India play outside sub-continent and three pacers would be the order of the day. Relentless accuracy with an ability to stop the flow of runs and the lusty hits that can clear ropes on any ground make Jadeja one of the most valuable players in this set-up. While ICC s Cricketer of the Year Ravichandran Ashwin with 464 runs and 82 wickets this season has held his own but the burly Tamil Nadu tweaker has been found wanting whenever the pitch hasn t been conducive. His earlier records suggest that he has not been effective either in South Africa, England or Australia. For Jadeja, even if he doesn t get a heap of wickets, he has the ability to stop runs. READ: Kumble: Don’t see any reason why India can’t start winning abroad

If Jadeja s achievements this season can be quantified by numbers, Umesh s contribution (30 wickets in 13 Tests) can only be judged if we take into account the impact he has created time and again at the start of the opposition innings. He has been as effective with the old ball as he has been with the new ball. Not to forget Mohammed Shami has been unavailable for the better part of this home season. There was a time at least couple of seasons back when Umesh lacked consistency. He would often stray. But having worked on his bowling, he is now more accurate with more control on his swing.

From 2014 to now, the only thing that has changed in him is his mindset. He was always a very fit guy. He probably used to bowl a bit quicker than he is now but he has understood his game, become smarter. He used to bowl 145kmph regularly. Now he touches 140kmph at odd times but he is very smart with what he wants to bowl in his spells. That has been a really, really big difference in his game. Kohli said that he has told Umesh that he is his strike bowler, something that has worked wonders for the Vidarbha lad. READ: Kohli: Will never refer to Australian cricketers as my friends

“Obviously, when give guys confidence saying you are my strike bowler, they respond in that way. Then they are not thinking about getting hit for runs. It s a give and take thing. I would give him 80 percent of the credit for his execution. You can take in all the advice but you have to go out there and do it eventually. Credit to him, the way he has taken his game to the next level, I am really happy for him,” Kohli lavished praise on his speed merchant.

But Kohli also said that he would rate both Umesh and Mohammed Shami at par. “I would put him and Shami together on par. In terms of pure pace, striking ability and making dents in the game, he would be at par with Shami. Obviously, you can t compare them to Zak [Zaheer Khan] yet because Zak had done it for a longer period of time.” The opening pair also looks set with KL Rahul s amazing consistency of six half-centuries in seven innings also being one of the highlights of the series. READ: India trounce Australia by 8 wickets in Dharamsala Test to reclaim Border-Gavaskar Trophy 2016-17

Murali Vijay also batted well in patches and Wriddhiman Saha has now undoubtedly sealed his place in the side with brilliant glovework behind the stumps and safe willow wielding in-front of it. 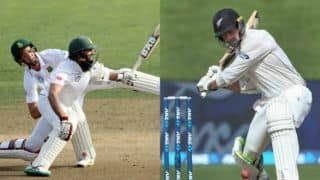