Watson tried to hit back a Jadeja delivery straight over his head, but Jadeja managed to pluck that hit in his hands.

They say catches win matches. This statement holds true more so when there’s a dire need for wickets. During the second Twenty20 International (T20I) between India and Australia at Melbourne on Friday, Indian all-rounder Ravindra Jadeja’s brilliant catch off his own bowling sent a dangerous looking Shane Watson back to the pavilion.

The wicket came just at the crucial time, when India needed to see the back of Watson, who could’ve changed the complexion of the game in no time. Importantly, it was the mode of dismissal that grabbed eyeballs. Watson tried to hit back a Jadeja delivery straight over his head, but the latter managed to pluck that hit in his hands. There was hardly half-a-second reaction time for Jadeja, who was sensational in holding on to that ball which was flying like a bullet.

Watson simply couldn’t believe what his eyes had seen. In normal circumstances, the ball should’ve gone towards the boundary within seconds. He simply stood there in disbelief, bemused at what had just happened. Alas, he had to leave, but not before suggesting he was mighty impressed by the effort of his former Rajasthan Royals (RR) team-mate. With his wicket, India came back right into the game and eventually won it by 27 runs. Watch the entire video here. 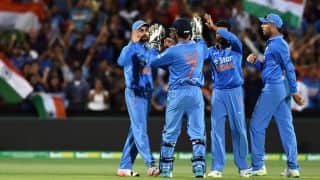