Alastair Cook said, "It's a tough defeat. Got to give India a lot of credit."

England captain Alastair Cook on Monday said all-rounder Ravindra Jadeja’s crucial innings of 68 off 57 balls was the turning point in the second Test of their five-match series against India. The tourists won the second Test by 95 runs to take a 1-0 lead in England.

Alastair Cook said, “It’s a tough defeat. Got to give India a lot of credit. The pitch was turning and bouncing in the last innings. It was a good toss to win. We didn’t bowl well in the first innings and credit to India the left very well.”

He added, “Credit to Jadeja, he was very brave. His innings was the turning point. There’s a group of players who are desperate to win for England. There will require some serious efforts and determination to turn this around. The lads in the team have a few days off before the Southampton Test and we need to regroup well.”

“A lot of the standout performances have been dealt by younger players. They (senior) players have to start pulling up. (On Matt Prior) It’s all up to Matt to decide. He has played fantastic cricket for England. At the moment he is the best wicketkeeper for England. It depends on how desperate he is to fight this and come back. He is a fighter,” he added.

Cook said about his captaincy, “It gets harder and harder until we win. I am willing to fight this around. If I don’t get this until the end of summer then we can think of it. I need to start scoring runs as well…” 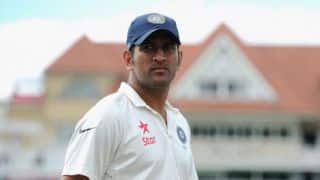 India learnt lessons from loss in 2011 in England: MS Dhoni