Ambati Rayudu scored a cautious 36 to help Mumbai Indians register a thrilling one-wicket win over Trinidad and Tobago in their Pool A Champions League Twenty20 match at Bengaluru. 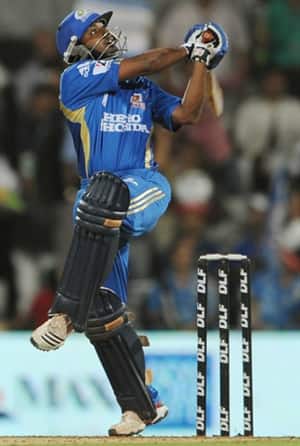 Mumbai Indians continued their winning-run in the Champions League T20 cricket tournament with a nail-biting one-wicket win over spirited Trinidad and Tobago at the Chinnaswamy Stadium.

Electing to bat, Trinidad and Tobago found the going tough and were bowled out for a paltry 98 in just 16.2 overs, courtesy a three-wicket haul from Mumbai Indians skipper Harbhajan Singh.

However, Mumbai Indians floundered during their runchase and were into all sort of trouble with T&T’s Ravi Rampaul doing most of the damage, claiming three wickets that had left them tottering at 33 for five in just 8.3 overs at one stage.

Ambati Rayudu (36) then took the onus on himself and stitched 32 runs in 7.2 overs with R Sathish and then added 21 runs with Lasith Malinga to keep them in the hunt.

Needing 11 runs from the last over, Malinga smashed a flat six over long-off in the second delivery. But the Sri Lankan was dismissed in the fourth ball while trying to steal an extra run.

Rayudu too was runout in the next delivery with the team needing two runs to win in the last delivery.

Earlier electing to bat, Trinidad and Tobago looked set for a blazing start with opener Adrian Barath (11), who was in a punishing mood from the word Go, blasting a couple of fours in the first over off Malinga.

However, the Sri Lankan pacer came back in his second over and uprooted his stumps with a beautiful yorker to deal the first blow.

Lendl Simmons (21) too stared off well, cracking a couple of fours and a six, but he soon run himself out in a ridiculous manner in the fifth over.

Pacer Ravi Rampaul then struck thrice in five balls spread over two overs to break the Mumbai Indians back as all of a sudden they were reduced to 16 for four in 5.1 overs.

Rampaul first dismissed Tirumalasetti Suman after inducing a leading edge off his bat as Sherwin Ganga took the catch. The pacer then struck again after two balls, removing Franklin (0) in the last ball of his second over.

Rampaul then dismissed Australian Andrew Symonds (0) with a yorker on off stump in the first ball of his next over to reduce the Mumbai outfit to 16 for four.

In the ninth over, Narine got rid off Kieron Pollard (9), who looking to pull the ball, got a bottom edge into the pad, as it trickled onto his stumps.

Rayudu and Sathish (14) then hanged on for sometime, before Malinga’s cameo of 15 runs in 8 balls drew Mumbai Indians close to the target.

However, finally it was Chahal who brought smiles to the Mumbai camp, picking up two runs in the last ball of the innings. (PTI)

Man of the Match: Ravi Rampaul

Will return to action when I'm 100 percent fit: Sehwag