Royal Challengers Bangalore lost their third wicket in form of Mayank Agarwal, who scored a well-made 32 off 22 balls. At the half-way mark, RCB reached 85 for three chasing 162 set by Kochi Tuskers Kerala.

Agarwal hit two boundaries and two sixes in his innings, and was caught by Vinay Kumar at long off. Before his dismissal, Kumar struck to remove Virat Kohli when he was looking to revive the Royal Challengers Bangalore innings after the early dismissal of Tillakaratne Dilshan.

Kohli made a quick fire 23 off 18 balls hitting four boundaries, and was caught in front of the wickets in the sixth over. Mayank Aggarwal is batting at 16, and has been joined by AB de Villiers.

Earlier, Kochi captain Mahela Jayawardene won the toss and elected to bat. Brendon McCullum and VVS Laxman provided a brisk start. McCullum smashed three boundaries and a six in the first two overs. First, he came down the track and smashed Zaheer Khan over the covers for four in the first over, and then hit a huge six over mid-wicket to Dirk Nannes along with two boundaries in the second.

Laxman freed up his hands when he danced down the track to hit RCB captain Daniel Vettorio for a four, and then hit a six off Tillakaratne Dilshan to join McCullum in the party. Laxman scored a quickfire 36 off 29 balls, hitting two boundaries and two sixes.

Virat Kohli provided RCB the much-needed breakthrough dismissing McCullum, who was caught at short thirdman by Dirk Nannes off Kohli, when he was trying to play the scoop shot. The Kiwi opener hit 45 off 32 balls, studded with four boundaries and two sixes. 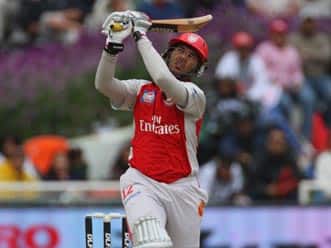