AB de Villiers‘ 82 off 44 balls pushed Royal Challengers Bangalore to 202/4 against Kings XI Punjab in Match 42 of IPL 2019 at the M Chinnaswamy Stadium, Bengaluru on Wednesday. This after Parthiv Patel provided RCB with a blazing start, helping his team to 70/1 in the Powerplay overs, but KXIP fought back in the middle overs claiming three wickets for just 39 runs from overs 6-14.

But, de Villiers, who started slow, took attack to KXIP bowlers in the death over to register his 34th IPL fifty and RCB managed to ransack 80 runs in the last five overs, including a massive 20-run over off Mohammed Shami‘s final over – the 19th of the innings with de Villiers hitting the Indian international for three straight sixes. Shami finished with 4-0-53-1. The final over, bowled by Hardus Viljoen was taken for 27 runs as he finished with 4-0-51-1. The fifth wicket association between de Villiers and Marcus Stoinis (46 off 34 balls) yielded 121 runs in just 66 balls.

For KXIP, the spin duo of Murugan Ashwin and Ravichandran Ashwin combined to give away just 46 runs in their eight overs. The skipper returned 3-0-15-1.  FOLLOW LIVE SCORE: RCB vs KXIP

Earlier, RCB skipper Virat Kohli was given a life off Shami‘s first ball of the match when Viljoen dropped dolly at midwicket when Kohli whipped one uppishly. Kohli added insult to injury with two back to back fours off the next two balls in the over. But, Shami had the last laugh when in his over, Kohli drove one upplishly and checked his shot to hand Mandeep Singh an easy catch at extra cover. FOLLOW LIVE BLOG: RCB vs KXIP

Patel, who had hit a brilliant fifty in the previous match against CSK, was on song at the other end taking two fours off Ankit Rajpoot first over and then added one off Shami then anotheroff Rajpoot, despite failing maximise two free-hits off two consecutive no-balls from Rajpoot.

De Villiers started well with a four off Rajpoot with pull while Patel slammed the first six off the match straight over the bowler’s head to bring up the team’s fifty in the fifth over. Shami’s third over was taken for 18 runs with Patel smashing the Indian international for three fours and a six. Patel reached 43 off just 23 balls with the help of seven fours and two sixes while De Villiers was on nine off seven balls. Shami’s three overs went for 35 runs while Rajpoot three went for 33.

RCB’s rut in the middle overs was started by Patel who was undone by a M Ashwin googly, playing across the line and the leading edge was well taken by skipper R Ashwin at covers. Patel went for 43 off 24 balls after hitting seven fours and two sixes. POWERPLAY UPDATE: Parthiv Patel blitz takes RCB to 70/1 in Powerplay overs

In the next over, skipper Ashwin bowled a peach of a delivery – an arm ball – to castle Moeen Ali for four. Viljoen, who had earlier dropped Kohli in the second over, came in to the attack and with a slower one got rid of Akshdeep Nath for three, caught at extra cover by Mandeep.

De Villiers and Stoinis were left to rebuild the innings, which they did and eventually finished with a big flourish. 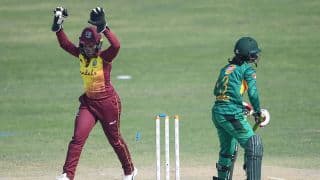