Kings XI Punjab skipper Ravichandran Ashwin won the the toss and elected to bowl first against Royal Challengers Bangalore in Match 42 of the IPL 2019 at the M Chinnaswamy Stadium, Bengaluru on Wednesday.

Nicolas Pooran in for Sam Curran. Harpreet Brar sits and in comes Ankit Rajpoot for KXIP. For RCB, Dale Steyn out with a niggle and in comes Tim Southee, and finally Washington Sundar gets a game in place of Pawan Negi.

With back-back-back victories, the recent coming in an edge-of-the-seat thrilleragainst Chennai Super Kings (CSK), Royal Challengers Bangalore (RCB), still languishing at the bottom of the table, host Kings XI Punjab in match 42 of the Indian Premier League (IPL 2019) at the M Chinnaswamy Stadium in on Wednesday.

Having survived a brutal assault at the hands of MS Dhoni in their previous game, Virat Kohli will ensure that they pull out all stops to seal a hat-trick of wins and keep slim chances of making it to the playoffs alive.

The homeside can take heart from the fact that their batting stalwarts Kohli and AB de Villiers both who did not click against CSK, registered match-winning knocks in the reverse fixture, an unbeaten 59 by de Villiers and 67 by Kohli when they met in the first leg.

Punjab will equally be itching to get back to winning ways specially after losing their last match to the Delhi Capitals, which now sees the Ravichandran Ashwin-led outfit in the fifth place with five wins and as many losses. (CHECK OUT: POINTS TABLE)

Punjab would want to consolidate their position in the points table with the help of hard-hitting West Indian Chris Gayle, KL Rahul and David Miller all of whom will be looking to capitalise on RCB s weak bowling.

With RCB finding the momentum rather belatedly, it remains to be seen how long they can carry the momentum with a powerful Punjab side breathing down their necks. Let s wait and watch 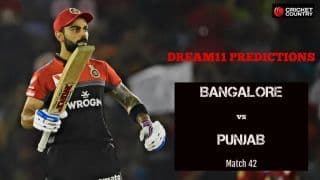 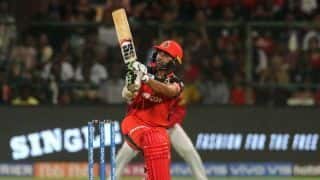