Former South Africa Test player Kyle Abbott took 17 wickets in Hampshire‘s County Championship win over title-chasing Somerset – the best figures in first-class cricket for 63 years. The pacer’s match return of 17/86 is the best ever for Hampshire and the best overall since England spinner Jim Laker took 19-90 against Australia in 1956.

Abbott, 32, had taken 9-40 in the first innings and replicated his incredible fast bowling with a remarkable 8-46, the Championship’s first 17-wicket haul for 80 years.

“It hasn’t quite sunk in. It is pretty incredible. Yesterday I didn’t think I’d take nine and I didn’t think I’d take eight today. I reckon that is the best I can bowl,” Abbott said. “Everything I wanted to do worked. It just happened to be one of those days – it was incredible. When it started to reverse it got quite fun. We knew we had to get into their middle order and put pressure on them as 280 was a long way off.

“I didn t expect that when I woke up this morning. It was nice to get a couple early and then got on a little bit of a roll and it s got us into a nice position. As soon as I came back I heard all the stats. It is all nice to have. There was an opportunity to put them under pressure and we did they have a Championship on the line.”

Somerset, who needed 281 to win, were skittled for just 144 in their second innings on Wednesday. The 136-run defeat, Somerset’s third loss of the season, means they will need to beat their title rivals Essex at Taunton next week if they are to win the Championship for the first time. Essex are on the brink of victory against Surrey.

“At 86-0 we were just thinking if we get one of the openers and the captain that was the goal. They were under huge pressure, they are young guys searching for their first championship; we had nothing to lose,” the fast bowler added.

“Would I prefer to finish third or spoil Somerset’s party? I wanted to spoil the party by a long way. They celebrated against us at the One-Day Cup final so we wanted to give them some hard work for next week against Essex.” 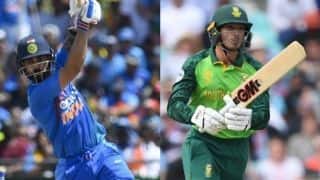 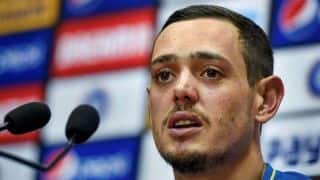 India assessed the conditions better than we did: Quinton de Kock