Meanwhile, continuing their brilliant run in the Red Bull Campus Cricket World Finals, Northwest University (NWU) of South Africa stormed into the final, defeating Bangladesh s University of Liberal Arts Bangladesh (ULAB) by seven wickets in the first semi-final on Friday. After restricting ULAB for 121/7, South Africa s NWU batsmen thrashed the bowlers all around the park and chased down the target in 14.4 overs at the picturesque Galle International Stadium. NWU s opener Wihan Lubbe (32 off 15 balls) and Man-of-the-Match Janneman Malan (69 not out) were the major contributors to the cause. 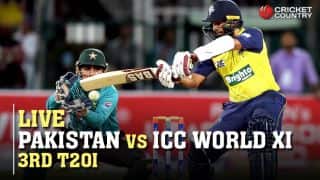 Eoin Morgan: England have a long way to go in T20 cricket