Steven Smith was banned by Cricket Australia for one-year, apart from not being allowed to captain for 2-years.

Steven Smith may have confessed to his role in the ball-tampering row, but reports suggest that he too was unaware of the plan until shown on giant screen present at Cape Town. Smith was stripped of captaincy and banned by Cricket Australia for 1-year. Smith also won’t be able to captain Australia for two years. It is well known that he had “knowledge of a potential plan” to tamper with the ball and did not “take steps to seek to prevent the development and implementation of that plan”.

According to another report by FairFax Media, it is said that CA s investigator believes that Smith disliked the plan but did not known the details of it. It is also suggested CA found that the sandpaper was used twice on the ball, which umpires believed had not been sufficiently altered to warrant replacement, and had come from a kit bag though it’s unclear who supplied it for use. Sandpaper is commonly used by players to smooth their bats.

It was on Friday that Smith’s dad was recorded throwing his son’s cricket kit in the garage. Peter Smith said: “He’ll be fine, he’ll survive, he’ll survive.” 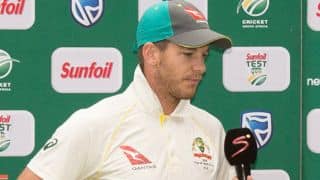